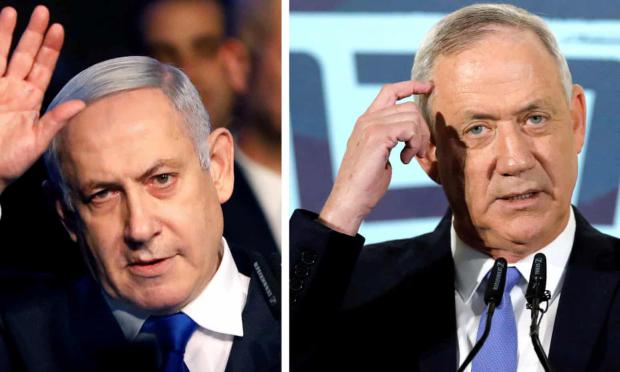 On Monday, Israelis are voting for the third time since last April, impasse occurring twice before, what may happen again this time.

According to the latest pre-election polls, Netanyahu's Likud party and lead challenger Benny Gantz's Blue and White each are predicted to win 33 of 120 Knesset seats.

A 61-seat majority coalition is required to form a government. What neither leading party achieved twice before may be repeated a third time following voting on Monday.

Likud and Blue and White each appear a few seats short of cobbling together a ruling majority.

"I hope that today will be the day that we change the tune, stop the mudslinging (and) stop the lying," adding:

"Hopefully on this day we will begin the process of healing and begin living together with each other."

Voting in Occupied Jerusalem, Israeli president Rivlin said "(t)his is normally a festive day, but the truth is that I don't feel celebratory."

"I only feel a sense of deep shame…We don't deserve another awful and grubby election campaign like the one that ends today, and we don't deserve this never-ending instability."

"We deserve a government that works for us." Like the US and other Western countries, it only "works" for Israel's privileged class.

The vast majority of its Jewish citizens have no say over how they're governed.

Israeli Arabs and Occupied Palestinians are ill-served and abused by ruling authorities controlling their lives.

Gantz earlier and ahead could easily cobble together a ruling coalition by including Joint (Arab) List Knesset members in it.

Instead he refused to ally with Arab representatives twice before — supporting apartheid rule like all Israeli regimes from inception.

According to polls, his party is projected to win a record-high 14 or 15 seats — making him a potential kingmaker if Gantz agreed to included Joint List in a ruling coalition with portfolios for the first time in Israeli history.

The Times of Israel cited unnamed analysts who believe that Gantz "may try to mold a minority coalition backed by the Joint List from the outside," how this might work not explained.

Odeh said for Gantz to have Joint List ruling coalition support, he must "change direction" — what never happened before in Israel politically.

Arab Knesset members are treated like potted plants — with no power to serve their constituents.

On Sunday, Haaretz editors slammed Netanyahu. Calling him Israel's "mudslinger-in-chief," they "demand(ed) that he retire from public life," adding:

"It's hard to find words to describe the toxic stink that wafts from the political sewage Netanyahu, his associates and his family are channeling into the public fields."

"There is not enough space to cover the entirety of mudslinging in Netanyahu's sewer politics."

"In the battle for the premiership, Netanyahu has stopped at nothing in demeaning his political rivals, delegitimizing them to the point of dehumanizing anyone perceived as standing in his way to another term."

"That includes methodical, consistent incitement against Israel's Arab citizens, Arab lawmakers and the legitimacy of the Arab vote."

"How many more shovelfuls of muck must Israelis endure…from the messiah of hatred, incitement and lies…"

More the same filled the strongly worded denunciation of Netanyahu by Haaretz editors, wanting an end to his "poisonous rule on Monday."

Anti-Iran Saber-Rattling by US and Israel