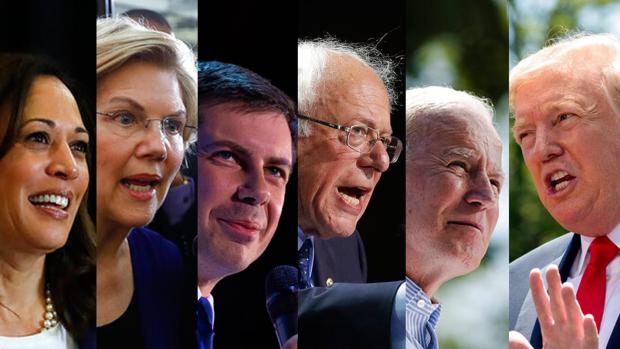 The most redeeming thing about longtime con man Sanders is he's not Trump or Bloomberg — billionaires who got super-rich the old-fashioned way.

Both figures and an array of other deplorable undemocratic Dem presidential aspirants are on the wrong side of virtually all domestic and geopolitical issues harmful to ordinary people everywhere.

With no chance for higher office, Tulsi Gabbard alone is on the right side of most issues, by no means all.

As things now stand according to polls, he's ahead in this week's Nevada caucus, leading Biden by three points, other Dems by around 10 points or more.

He leads in California and Texas polls, the two most important Mach 3 Super-Tuesday primary states — how he fares to influence new polls in other key states, notably New York, Florida and Ohio where he's currently behind.

A February 10 Quinnipiac poll has Bloomberg beating Trump by a 51 - 42% margin if both figures face off in November.

The poll's other results were as follows:

Buttigieg is also slightly ahead of Trump 47 - 43 percent," adding:

Trump's "favorability rating is underwater, as 42 percent of registered voters have a favorable opinion of him, while 55 percent have an unfavorable view of him."

Buttigieg and Klobuchar are viewed more positively than negatively — 31 and 44% of voters knowing little about them respectively, according to the poll.

On whether Trump deserved acquittal by the Senate, voters are evenly split, disagreement overwhelmingly along party lines, independents somewhat more for acquittal than against it.

Since January, Biden lost 9% of support nationally. Bloomberg nearly doubled his national support from 9 - 15%, his blitzkrieg of ads the main reason.

Aiming to buy the presidency by spending over $1 billion of his own money makes him a serious contender for the nation's highest office.

Because of his right-wing extremism, he's a figure to be opposed and feared, not supported.

It's a long time from now to November, a lifetime in presidential politics.

Much can happen over the coming months, notably manipulation by Dem party bosses the way things were rigged for Hillary in 2016.

Chances for similar shenanigans this year are significant, shown by how Iowa and New Hampshire turned out.

Sanders led other candidates by a significant margin in both states. He lost Iowa to caucus rigging, barely winning New Hampshire.

Despite leading in national polls, primary outcomes ahead could turn out otherwise.

Even if he wins most primaries, the way Dem delegates are proportionately awarded could leave him well short of a majority needed to be nominated — what dirty business as usual super-delegates could deny him in July.

"Immunity Certificates" Are Coming - COVID-Survivors To Get 'Special Passports' En

Where they refuse to stay home:

Yemen Is Shattered And The U.S. Helped The Saudis Break It

Global Belligerent US to Escalate Direct and/or Proxy Wars?

US Unemployment to Exceed 40% by End of April?

US Knew of a Novel Coronavirus Threat, Failed to Prepare