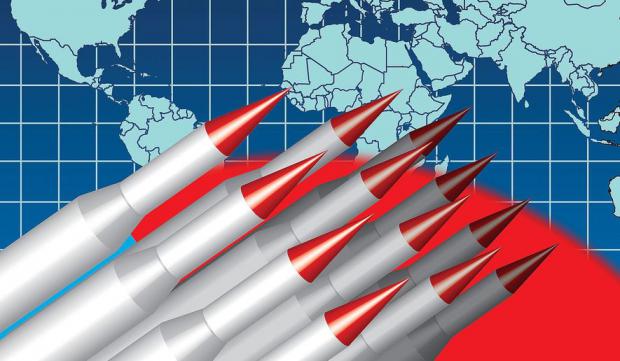 Trump proved he's more a deal breaker than maker, abandoning international obligations instead of observing them — notably the landmark JCPOA and INF Treaty, based on Big Lies.

Is New START next to go? It's the only remaining arms control treaty remaining between Russia and the US.

According to nuclear expert Helen Caldicott, Russia and the US have around 94% of the world's nuclear arsenal between them, adding:

"(W)e are closer to nuclear war now, (early in) the twenty-first century than we've ever been before, even during the height of the Cold War" — because of US rage for dominating other nations by whatever it takes to achieve its objectives.

The nuclear threat is real. Ignoring it is like "sleepwalking to armageddon," Caldicott stressed.

Trump believes "because they exist, nuclear weapons ought to be used," especially tactical nukes in US war theaters.

"Trump is totally willing to blow up the world to protect his fragile sense of self. Please God don't give this man the nuclear codes."

Before his 2016 election, Schwartz was quoted, saying "I genuinely believe that if Trump wins and gets the nuclear codes, there is an excellent possibility it will lead to the end of civilization."

He never read it or knows anything more about it than what hardline regime officials told him, notably Bolton when serving as national security advisor.

Article XIV of the treaty lets both presidents extend it up to another five years by mutual consent.

With a few hundred nuclear warheads in its arsenal, around 100 able to be mounted on intercontinental ballistic missiles, Beijing repeatedly expressed no interest in an arms control treaty with the US and Russia.

Last November, China's Foreign Ministry arms control department director Fu Cong said nuclear talks are unrealistic unless "the US agrees to reduce its arsenal to China's level, or agrees for China to raise its arsenal to the US level."

Nuclear arms control begins with the US and Russia because of the dominant size and sophistication of their arsenals.

It limits deployed strategic nuclear warheads and bombs to 1,550, about 30% fewer than the SORT limit, nearly 75% below START I's 6,000 allowed.

Deployed and non-deployed ICBM launchers, SLBM launchers, and bombers are limited to 800 — about 50% fewer than START I permitted.

They must be located away from deployment sites and appropriately labeled for easy identification.

On-site monitoring and verification were agreed on to assure both countries remain in compliance with their obligations.

If New START isn't renewed and expires next February, limits on the world's largest nuclear arsenals no longer will exist for the first time in nearly half a century.

Obama's 2010 and 2015 National Security Strategies pledged US first-strike use of these weapons against any adversary, nuclear armed or not.

Obama approved a $1 trillion program to upgrade America's nuclear arsenal over the next 30 years, assuring other nuclear powers will follow suit.

As long as these weapons exist, they'll likely be used again with devastating results.

The only way to prevent nuclear war is by eliminating these weapons entirely, the world community uniting on this most vital of all issues to save life on earth from possible extinction.

US imperial madness poses an unparalleled nuclear threat, the only nation ever to use them, likely willing to use them again.

Today's thermonukes can destroy entire cities and surrounding areas with no place to hide.

If agreement isn't reached to eliminate them and end wars, they'll eliminate us one day if used in enough numbers.

We have "high confidence" Russia is complying with the treaty. "Without the treaty and its verification provisions, we'd be flying blind."

"It is strongly in the US national interests to extend New START for five years so that the United States and Russia can continue to realize the mutual benefits and stability it provides."

"If we were to lose that for any reason in the future, we would have to go look for other ways to fill in the gaps for the things we get from those verifications."

Virtually all key US allies expressed support for extending New START for another five years.

In early December, Putin said "Russia is ready to extend the New START treaty immediately, before the year's end and without any preconditions."

Trump has final say in the US. His opposition that's influenced by hardliners surrounding him likely means New START will be abandoned with him as president.