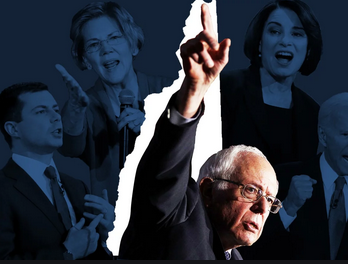 The NYT noted Sanders' narrow victory over Buttigieg, failing to explain why his pre-election 7.4-point margin didn't hold with around 90% of New Hampshire votes counted.

Noting his "modest success" in two contests so far," the Times said it "rais(es) the prospect of a drawn-out nominating process that could last through the spring."

More likely it'll be decided by super-delegates in July for anyone but Sanders — unless enough primaries are rigged against him before convention time.

His narrow NH triumph is hardly "the beginning of the end for Donald Trump," claiming "a great victory" with about 10% of votes still to be counted that could change the outcome.

He's a democratic socialist/political independent in name only, voting nearly all of the time along undemocratic Dem party lines.

Poor showings in Iowa and NH got Senator Michael Bennet and entrepreneur Andrew Yang to drop out of the race.

Sanders has one thing going for him — fundraising, $25 million in January alone, leading other Dems except for Bloomberg.

Reportedly he's willing to spend a billion dollars or more to buy the presidency.

As of early February, he spent over $300 million, according to ad tracking firm Advertising Analytics.

Time magazine, the NYT, and other media said he intends to double this amount following Iowa — for advertising, field offices and staffers.

"Buttigieg, Klobuchar are top moderate candidates"— in name only, their agendas hard-right like the vast majority of Washington's political class.

According to WaPo, they were "the big story (in) New Hampshire," not Sanders, calling his triumph underwhelming, far below his 2016 showing in the state — perhaps rigged to turn out this way.

"Biden's collapse over the past few weeks has created a vacuum for (other) candidates," said WaPO, deep-pocketed Bloomberg the wild card in the race, spending hundreds of millions of dollars to become Dem standard bearer.

If successful, two billionaires will square off against each other in November for the first time in US history, both figures notoriously dismissive of the public welfare, assuring America's privileged class is exclusively served ahead no matter who wins — the way it's always been, notably since the neoliberal 90s.

Based on US history, party bosses can count them in whatever way they want things to turn out, today with electronic ease.

The Journal also mocked Sanders, saying "(w)hether (his narrow NH triumph is) good news for the (Dem) party is another story."

No presidential aspirant of either right wing of the one-party state is for peace, equity, justice, the rule of law, and other democratic values across the board.

Tulsi Gabbard is closest to meeting this standard, no other Dem or Trump remotely close to her on the issues, including longstanding con man Sanders.

His voting record belies his rhetoric, going along to get along most of the time, notably on geopolitical issues.

It's early in the race for the White House. By end of March, two-thirds of Dem delegates will have been chosen.

Super-delegates may decide things in July, Sanders a long shot at best to be Dem standard bearer.

The U.S. of A-Bomb: How American Nuclear Weapons Changed the Course of Human History