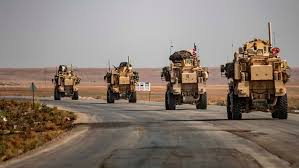 At the same time, an unnamed Iraqi official accused the Pentagon of supplying ISIS jihadists in the country with weapons and military equipment.

"The American forces send aid from their bases to the ISIS terrorists in the Makhoul mountains, and their assistance still continues," the official stressed, adding:

Iraqi forces seized US weapons during an operation against ISIS in al-Hazar island. US military bases in Iraq are used against the host country and Syria.

Russia's Foreign Ministry earlier accused the US of supporting ISIS, saying "unidentified helicopters (supply weapons and military equipment) to ISIS terrorists" in areas where the US deploys them.

"Russian drones and intelligence have not recorded any confrontations between" between them. They're allies, not enemies.

According to the Arabic-language Ma'aloumeh news website, citing  head of the Badr Organization office in al-Anbar province, Iraq, "US forces stationed (in the area) facilitated the trafficking of ISIL terrorists and their transfer to Wadi Houran (Iraq) and the Western desert by reopening a number of roads and heliborne operations."

Iraqi security expert Kazim al-Haaj said "US Army troops are preparing and training the ISIL militants in al-Qadaf and Wadi al-Houran regions of Al-Anbar province with the aim of carrying out terrorist attacks and restarting insecurity in Iraq."

Security expert Karim al-Khikani made similar comments, saying the US is shifting ISIS fighters from Syria to Iraq to incite violence and instability as a pretext for continuing to occupy the country against the will of its officials and people.

Reportedly, he urged the assassination of Iranian General Soleimani, Bloomberg quoting him saying:

Aggressive US action will "rattle the delicate internal balance of forces and the control over them upon which (Iran) depends for stability and survival."

With hardliners Pompeo, Wurmser, and their henchmen manipulating Trump, shifting ISIS terrorists to Iraq may be prelude for further US war on the country.

Will Iran be next? Wurmser was quoted saying the US might "have to think seriously about going directly into Iran."

While it's highly unlikely, with hardliners running US foreign policy, anything is possible by accident or design.

According to the Kuwait-based Arabic-language Al-Qabas broadsheet, 16 US military personnel were seriously injured from retaliatory strikes on US bases in Iraq in response to the Trump regime's assassination of General Soleimani, citing unnamed informed sources.

Flown for treatment at the US military hospital in Kuwait, the injured personnel suffered severe burns or serious shrapnel wounds, requiring surgery and intensive care.

Others sustaining less serious injuries are being treated in Iraq. Eight US soldiers were flown to Germany for treatment of concussion symptoms.

The Washington Post reported that "several dozen US troops were…treated for concussion" symptoms.

Was December Attack on US Base on Iraq a Trump Regime Anti-Iran False Flag?

Iraq to Neocons: Get the Hell Out of Our Country

Rising Numbers of US Troops in Iraq with Traumatic Brain Injuries

Rockets Strike US Embassy in Baghdad