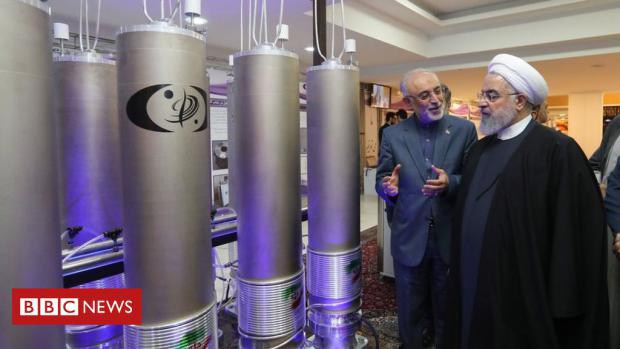 The nuclear deal dispute resolution mechanism and sanctions snapback provision can take effect if one JCPOA signatory claims another failed to meet its obligations under the deal — depending on the specific complaint, along with following required procedures. They're complicated.

The so-called Working Group on the Implementation of Sanctions Lifting, coordinated by the EU's high representative, has 30 days to resolve the issue in question.

If impasse follows, a Joint Commission comprised of eight representatives from the P5+1 countries, the EU and Iran is convened to try resolving what's disputed.

If resolution fails, the foreign ministerial level of the parties would get involved to try breaking the impasse.

Its members, in turn, could refer the matter to a three-member Advisory Board, including an independent representative from a non-signatory nation.

If impasse persists, the issue would go back to the Joint Commission.

If it remains unresolved after the above steps, the party raising it may cease observing its JCPOA commitments, and/or refer the matter to the Security Council for resolution.

If things go this far, the SC has 30 days to resolve impasse among the P5+1 countries.

If agreement still isn't reached, previously removed SC sanctions would automatically be reimposed, nations with veto power not permitted to use it for this issue.

If the above process sounds confusing, it surely is.

If impasse persists throughout the above process, Iran may formally withdraw from the JCPOA before SC sanctions are reimposed. Either way, things appear headed in this direction.

Further complicating things are parts of the JCPOA that are subject to interpretation.

"(W)e (are) left with no choice (sic), given Iran's actions, but to register today our concerns that Iran is not meeting its commitments under the JCPoA (sic) and to refer this matter to the Joint Commission under the Dispute Resolution Mechanism…"

"We do this in good faith (sic) with the overarching objective of preserving the JCPoA and in the sincere hope of finding a way forward to resolve the impasse through constructive diplomatic dialogue (sic)."

The full statement contained disinformation and Big Lies. The Trump regime unlawfully withdrew from the JCPOA in May 2018.

In response, Britain, France, Germany, and the EU breached their mandated obligations under the deal, falsely claiming otherwise.

Under JCPOA Articles 26 and 36, Iran may cease observing its voluntary commitments.

It may increase uranium enrichment for peaceful purposes beyond levels agreed on if other signatories fail to fulfill their obligations under the agreement.

That's precisely what happened by Trump's illegal withdrawal, along with breach of the agreement by Britain, France, Germany and the EU.

Iran remains in full compliance with its obligations as stipulated by JCPOA provisions.

The US is a lost cause. So are European signatories for siding with the Trump regime, breaching their mandated commitments while wrongfully blaming Iran for their own unlawful actions.

Yet their joint statement falsely said they "fully upheld (their) JCPOA commitments (sic)."

They did not! Further disinformation followed, saying:

Polar opposite is true!

"The E3 have worked hard to address Iran's concerns (sic)." They did not by breaching their obligations since May 2018, doing nothing constructive to change things.

"…Iran has continued to break key restrictions set out in the JCPoA (sic)." Iran is in full compliance with its provisions.

"Iran's actions are inconsistent with the provisions of the nuclear agreement (sic)" — a willfully false statement.

"We do not accept the argument that Iran is entitled to reduce compliance with the JCPoA."

As E3 nations know, Iran acted legally under Articles 26 and 36, the US and Europe illegally.

In the US, it's also binding constitutional law under its Supremacy Clause (Article VI, clause 2).

Iran, Russia and China remain in compliance with their JCPOA obligations. The US, E3, and EU breached theirs.

What took years of negotiations to conclude is close to officially unravelling because European signatories side with hostile US policies toward Iran.

If unlawful US sanctions are lifted and Europe comes into compliance with its mandated obligations, Iran will again adhere to its voluntary commitments.

Iran has no legal obligation to voluntarily adhere to commitments that Western signatories violated, showing no intention of reversing policy.

Iranian officials stressed that if European signatories remain in noncompliance, the landmark JCPOA will no longer exist.

"(A)fter a year, the European side was not successful in fulfilling its obligations and this made Iran to reduce its JCPOA commitments in five interval steps taken under sections 26 and 36 of the nuclear deal," adding:

"The Islamic Republic…is ready to preserve the nuclear dear and will support the related efforts done by other partners."

"But Iran will give appropriate and serious response to any destructive measures" or other hostile US or E3 actions.

The Trump regime's assassination of General Soleimani and failure of EU countries to fulfill their JCPOA obligations heightened regional tensions, increasing the chance for greater confrontation.

A statement by Russia's Foreign Ministry said the following:

"We reaffirm the stand that it is unacceptable to activate the mechanism under paragraph 36 of the JCPOA," adding:

"We believe that the EU trio's actions are inadmissible, as they contravene the goals and the sense of the JCPOA."

Iran's UN envoy Majid Takht-Ravanchi said his nation's observance of JCPOA provisions was foiled by getting "almost nothing in return" from its Western signatories.

"For 20 months, the E3-following UK appeasement policy-has bowed to US diktat."

"That hasn't gotten it anywhere-and it never will."

"Rather it should muster the courage to fulfill its own obligations."

Nothing indicates what Europe hasn't fulfilled since May 2018 is about to change.

Whatever happens ahead, the Islamic Republic of Iran no doubt will defend its sovereign rights while complying with its international law obligations — how it operated throughout the past 40 years.