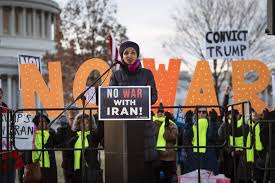 All nations unwilling to subordinate their sovereign rights to US interests are on its target list for regime change.

US policies toward them are based on Big Lies and mass deception.

Throughout the post-WW II era, all US hot wars and by other means were against nonbelligerent countries threatening no one — from North in the 1950s Korea to the present day.

All nations the US doesn't control are on its target list for regime change — notably Russia, China and Iran.

All of the above is what its imperial agenda is all about — humanity's greatest threat, risking possible global war with nuclear weapons by accident or design if the world community doesn't unite to stop the madness.

The killings greatly angered millions of Iranians, Iraqis, and the Arab street against the US regional presence, against the menace it poses.

A new ABC News/Ipsos poll released Sunday showed 57% of independents and 56% of all US adults surveyed disapprove of Trump's Iran agenda.

A majority of respondents (52%) believe Soleimani's assassination made the US less safe, only 25% saying the country is more safe, 22% saying it had no effect either way.

On the issue of possible US conflict with Iran, 73% of respondents expressed concern about the possibility in the wake of Soleimani's assassination (94% of Dems, 52% of Republicans, 73% of independents).

Trump unjustifiably justified Soleimani's assassination based on Big Lies, falsely claiming it was to "stop a war," and an "imminent threat" of attack on four US regional embassies.

On Sunday, US war secretary Mark Esper refuted Trump's claim. Asked if there was evidence of a threatened Iranian attack on US regional diplomatic facilities, he said:

"I didn't see one with regard to four embassies," separately on the same day saying he knew of no "specific evidence" of an imminent Iranian threat to US diplomatic facilities.

Omitted from his remarks was that the Islamic Republic never preemptively attacked another nation throughout its 40-year history — or that Iran, formerly Persia, never waged aggressive war for the past two or three centuries.

Iran is the region's leading proponent of peace, stability, and mutual cooperation among all nations — the US, NATO, and Israel its major aggressors.

Neither Iran or General Soleimani threatened anyone. Pompeo falsely accused the regionally admired general of plotting "imminent and sinister" attacks on US officials and military personnel.

He presented no evidence backing his claim because none exists! Saying the assassination was justified defied reality.

Iran's retaliation against Pentagon bases in Iraq sent a message that further hostile US actions will be responded to harshly.

IRGC missiles can strike US bases, warships, and imperial allies anywhere in the region with devastating force.

Washington is its own worst enemy longterm, its hostile actions sowing the seeds of its decline as a world power politically, economically and otherwise.

It's weakened by aiming to dominate other nations instead of fostering cooperative relations, what in hindsight is likely to be known.