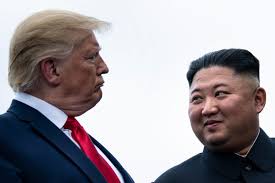 US nuclear talks with North Korea were and remain all about unacceptable Trump regime demands in return for empty promises to be broken — why they were dead before begun.

An official announcement of their demise is likely from Pyongyang in days.

DJT is "reconsider(ing)" further talks with Kim Jong-un. "We have a lot of tools in our tookkit…Additional pressure can be brought to bear."

The US "dealt with this situation without success over the years." The Trump regime "will take action" if the DPRK disobeys its demands.

"We will be extraordinarily disappointed, and we will demonstrate that disappointment."

Fact: Since the Korean peninsula was divided post-WW II, US hostility toward nonbelligerent North Korea threatening no one has been unrelenting.

Kim wants normalized relations with the US and West. He's willing to denuclearized in return for good faith US steps not forthcoming earlier or by Trump.

His legitimate demands include    an end to decades of uneasy armistice, removal of unacceptable sanctions, normalization of relations with the US and other countries, along with iron-clad security guarantees.

The US war budget includes a "sort of thrust for confrontation with" these countries, he added.

Since mid-December, its officials have been silent, by no means indicating a calm period before something quite different.

These steps would serve as "positive and offensive measures for fully ensuring the sovereignty and security of the country," he reportedly stressed.

Last spring, he gave Trump until yearend to engage in evenhanded talks, adding he'll only agree to another summit if the US agrees to "constructive…improvement of relations…with a proper attitude and (willingness to seek) proper solutions…"

With yearend at hand, he's gotten no positive signs from Trump or hardliners surrounding him.

Over the weekend, Pompeo said he and other Trump regime officials are "watching (developments in) North Korea" closely — calling for Kim to denuclearize, offering nothing in return.

If negotiations collapse, what appears likely, Pyongyang said it could take what it called a "new path."

The US, UK and France rejected a joint Sino/Russian Security Council draft resolution that called for lifting unacceptable sanctions imposed on North Korea in 2016 and 2017.

Their measure begs the question. Why didn't they veto what's clearly unacceptable?

Why do they observe what never should have been imposed in the first place — if they're doing it?

Why haven't they broken from hostile US-led Western policies toward North Korea?

When will Kremlin officials stop calling the US its "partner" when bipartisan hardliners in Washington consider Russia its mortal enemy — going all-out to undermine the country politically, economically, financially and technologically?

When will Sino/Russian officials tell Trump regime hardliners to go to hell — in diplomatic language, of course!