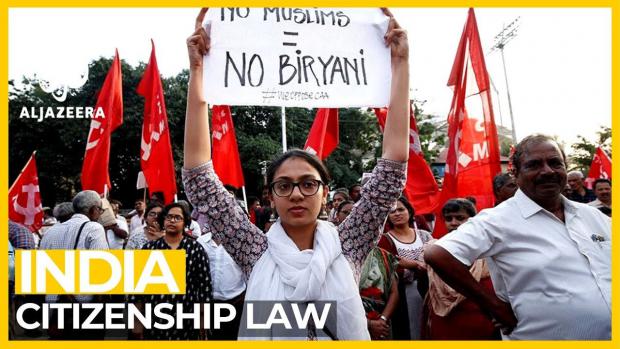 India's 2019 Citizenship Act expedites the process for persecuted minorities of Pakistani, Afghan and Bangladesh nationality who resided in India since 2014.

It applies only for Hindus, Sikhs, Buddhists, Christians, Jains, and Parsis, Muslims excluded.

According to the UN Human Rights Office, the new law breaches laws, conventions and treaties to which India is a signatory.

"Fundament(ally) discriminatory in nature, (it) undermine(s) the commitment to equality before the law enshrined in India's constitution and India's obligations under the International Covenant on Civil and Political Rights and the Convention for the Elimination of Racial Discrimination, to which Indian is a State party, which prohibit discrimination based on racial, ethnic or religious grounds," said the UN office, adding:

"Although India's broader naturalization laws remain in place, (the new law) will have a discriminatory effect on people's access to nationality."

At around 200 million, India has the world's second largest Muslim population, exceeded only by Indonesia.

A 2015 analysis estimated the global Muslim population at around 1.8 billion, second only numerically to Christianity at over two billion.

India's Muslims constitute about 15% of the population, making them a significant minority — numerically large in size.

The new Citizenship Law affords them second-class status on a par to how people of color in America and the West are ill-treated.

Large-scale protests in India continue against the law. Public gatherings were banned and Internet service cut to try stopping them.

Over the weekend, police reported 23 deaths from clashes with protesters, the true number likely higher.

Tear gas was fired into a library. Video footage showed journalists assaulted, violence committed by police, not protesters in most cases. Activists called for holding violent cops accountable for their human and civil rights abuses.

What's going on are the strongest anti-Modi protests since he took office in 2014.

On Friday, India's Ministry of Information and Broadcasting ordered the nation's electronic media to refrain from reports that could incite further violence — demanding "strict compliance."

"Our peaceful protests will continue till this illegal and unconstitutional citizenship law amendment is scrapped" — his view largely shared by countless others based on what's going on.

India is a secular state. "To exclude Muslims from becoming citizens…is unfair."

Modi's government lodged an official protest with Malaysia over his remark, accusing Mohamad of interfering in India's internal affairs.

"This piece of legislation strikes at the heart of the constitution, seeking to make India another country altogether. It is thus that so many people from so many different walks of life have raised their voices against it."

Guha was detained by police for involvement in the protests, then released. When arrested, he said: "I am protesting non-violently, but look they are stopping us."

News channel video footage showed him being dragged into custody by three policemen.

Opposition to the measure continues in much of the country, including by state leaders from regional parties.

Amnesty India executive director Avinash Kumar said the new "bigoted law legitimizes discrimination on the basis of religion. The people of the country have the right to protest against this law peacefully and express their views."

Around 14 Delhi Metro Rail stations were shut. Blocked roads into the city caused large-scale traffic jams. A number of flights from New Delhi airport were cancelled.

In 2018, Modi's government endorsed the Global Compact for Safe, Regular and Orderly Migration.

It commits nations to aid refugees, asylum seekers, and other migrants in situations where they're vulnerable to arbitrary detention and mass expulsion.

India's Supreme Court will review the new citizenship law. Perhaps it'll have final say on whether it stands or is struck down as unconstitutional.