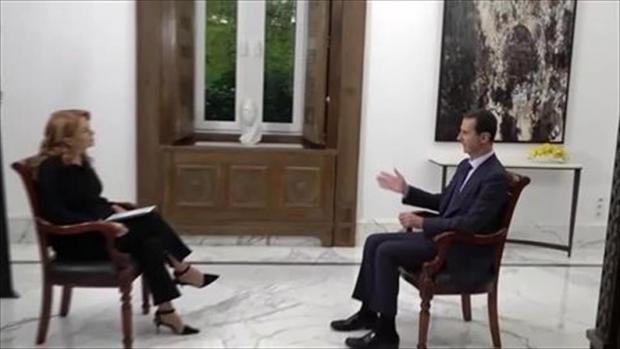 Assad's Interview with Italian Broadcaster It Refused to Air

Censorship is the new normal in the US and other Western countries, wanting views conflicting with the official narrative suppressed — especially when exposing high crimes of state, what crucifying Julian Assange, Chelsea Manning and others like them is all about.

Why did Italy's Rai News 24 interview Syrian President Bashar al-Assad in Damascus, then refuse to air his remarks? Clearly it's because he spoke uncomfortable hard truths, laying blame for endless war in Syria where it belongs.

Stressing Syria is coming out of the war stronger, he explained that government forces liberated most of the country from terrorists.

Many thousands remain in Idlib province, supported by the US, NATO, Israel, Turkey and the Saudis.

Things are slowly returning to normal in liberated areas. Assad debunked fake news about civil war in Syria. US aggression launched it, supported by other Western countries, the Saudis, Turkey, Israel and their imperial partners.

Assad: There's no "civil war…no sectarian war…no ethical war…no political war. It was (and remains) terrorists supported by outside powers. They have money and armaments."

Commenting on Russian involvement in aiding government forces combat terrorists, Assad said Moscow "believes that (observing) international law (is) in the interest of everybody in the world," adding:

"(B)y supporting Syria, they are supporting international law. (They're combatting) terrorists in the interests of the Russian people."

Syria is also a training ground for Russia's military to hone their battle skills in case needed to defend the homeland against US aggression.

"Syrian (territorial) integrity and sovereignty are in contradiction with the Turkish invasion" and US occupation of northern and southern Syrian areas. "That is very obvious and clear," Assad stressed.

Who launched war on Syria, he asked? "Who created this problem?" Who's responsible for millions of refugees?

It's "because terrorism (is) supported by Europe – and of course the United States and Turkey and others."

He called EU/NATO countries the "main player(s) in creating chaos in Syria" because their ruling authorities supported US terrorist foot soldiers "from the very beginning."

Syria's liberating struggle is all about protecting and preserving its sovereignty and territorial integrity, along with the freedom and welfare of its people, Assad stressed.

"The most crucial part in liberating any area militarily is to have the support of the public in that area or in the region in general. That has been clear for the last nine years," he said, adding:

"(Y)ou cannot have public support (by) killing civilians." The main problem to overcome is support by the US and its imperial allies for proxy jihadist foot soldiers, aided by Pentagon-led terror-bombing.

Asked about accusations of Syrian use of chemical weapons, Assad stressed that "since the very beginning of war," government forces never used these weapons, notably not against civilians they're trying to liberate.

"That never happened, never. You only have these videos of staged chemical weapons attacks."

"There's a mismatch between what we saw in the video and what they saw as technicians or as experts."

"Chlorine (cited by the OPCW) is not a mass destruction material. (T)he amount that they found is the same amount that you can have in your house. It exists in many households and used maybe for cleaning and whatever."

"That's what the OPCW did. They faked and falsified the report, just because the Americans wanted them to do so."

"(T)he OPCW is biased…politicized, and is being immoral, and those organizations that should work in parallel with the United Nations to create more stability around the world – they've been used as American arms and Western arms to create more chaos."

The above and related remarks about Western support for terrorists is why Rai News 24 failed to air the interview with Assad.

Asked if he feels like a survivor, he said:

"If you want to talk about a national war like this, where nearly every city has been harmed by terrorism or external bombardment and other things, then you can talk about all the Syrians as survivors," adding:

"I'm a part of those Syrians.  I cannot be disconnected from them. I have the same feeling."

"(I)t's not about being a strong person who is a survivor. If you don't have this atmosphere, this society, or this incubator to survive, you cannot survive."

The struggle for Syria's liberation has a long way to go because of US rage for endless war.

One thing is clear. Because Russia intervened in the war years earlier, Syria's leadership and military forces defeated US aims to gain another imperial trophy.

Media's Deafening Silence On The Biggest Scandal Of 2019 Is Chilling