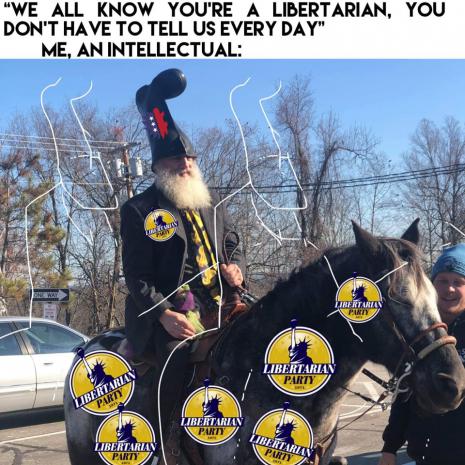 CONCORD, N.H., 11.15.19 — This past Friday, presidential candidate Vermin Supreme took to the streets in New Hampshire's capital with guns and ponies to protest the exclusion of Libertarians from state ballots.

Starting from Area 23 in Concord, the Guns N' Ponies parade marched the 1.7 mile route to the State House. Outside, a reception and press gaggle was held before the marchers went inside to visit Secretary of State Bill Gardner's office in hopes of witnessing Vermin file for the New Hampshire primary.

Nonetheless, the Vermin Supreme campaign was prepared to make history, with deputy campaign manager and LPNH Vice Chair Richard Manzo in attendance, who offered that the party is "funding and holding our own primary by mail-in," and Vermin telling Mr. Gardner that the party "is indeed holding a primary, which I suppose is a parallel primary or an outlaw primary."

In his capacity as Vice Chair, Richard Manzo then assisted Vermin in performing the first ever electronic, and first ever non-tax funded, primary filing to occur in the Secretary of State's office. Vermin will appear on the member-only primary ballot with results announced during the LPNH convention on January 11, 2020.