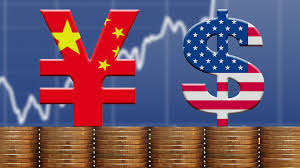 Major Sino/US differences have nothing to do with trade. They have everything to do with China's growing political, economic, financial, and military might bipartisan US dark forces want undermined.

Both nations are rivals, not partners. Along with Russia, China's growing prominence and might on the world stage conflicts with longstanding US aims to dominate other countries unchallenged — risking a potentially devastating clash of civilizations if its rage goes unchecked.

On Thursday in remarks before the US National Committee on US-China Relations (NCUSCR), 96-year-old Henry Kissinger warned of potentially catastrophic Sino/US conflict unless both countries resolve what so far have been major irreconcilable differences.

"It's no longer possible to think that one side can dominate the other," he stressed, failing to explain that China seeks cooperative relations with other nations — polar opposite US rage for dominance, risking unthinkable nuclear war by accident or design to achieve its aims.

Expressing confidence and hope that present bilateral tensions can be overcome, Kissinger said it's vital to "develop enough of a common conviction about the future, so that we can spare the world a conflict between two great societies" that neither one can win over the other.

He expects "both sides (will feel) obliged to move in the direction (he) sketched" — to reach accommodation on a "common conception of the evolution of the world" so that major "disagreements" can be "manage(d)."

Bipartisan hardliners in Washington are unbending. Prioritizing militarism, warmaking, and other tough actions, it wants other nations bending to their will, sovereign independent ones like China, Russia and Iran targeted for regime change.

Peace, stability, mutual cooperation with other nations, and multi-world polarity aren't notions in the US vocabulary.

It's why endless hot wars and by other means rage in multiple theaters, no end of them in prospect — no tolerance of sovereign independent nations unwilling to serve US interests over their own.

I'd love to share Kissinger's optimism that the US will agree that reaching accommodation with China is the only alternative. The same goes for Russia.

No evidence suggests things are heading in this direction, just the opposite. US rage for dominance remains unbending, an ominous sign for what's ahead.

Both sides have been unable to reach accommodation on trade talks, not even agreement so far on what's billed as a phase one deal that excludes major differences.

China is willing to makes sizable purchases of US agricultural and other products based on needs — short of committing to a specific dollar amount.

Trump and hardline regime trade negotiators haven't expressed willingness to roll back unacceptable tariffs, DJT threatening more if he doesn't get Beijing to bend to demands no responsible leadership should accept.

On Friday, Pompeo called for ratcheting up toughness on China, saying "we are confronted with…a challenge from" its government that is "inconsistent with" — one-sided US demands.

On Thursday, the Wall Street highlighted unresolved issues behind the inability of both sides to conclude a phase one deal.

Besides what's explained above, the Journal said "Chinese officials also have resisted US demands for a strong enforcement mechanism for the deal and curbs on the forced transfer of technology for companies seeking to do business in China," adding:

"Chinese officials also have resisted US demands for a strong enforcement mechanism for the deal and curbs on the forced transfer of technology for companies seeking to do business in China."

US trade representative Robert Lighthizer "isn't willing to roll back existing tariffs on Chinese imports, including widely criticized levies on consumer items, unless Beijing shows more flexibility on Washington's demands, according to a person familiar with the negotiations."

Both sides have been at impasse in talks since spring 2018 over unacceptable US demands.

Even if a phase one deal is reached, major irreconcilable differences are highly unlikely to be resolved no matter how many more rounds of talks are held.