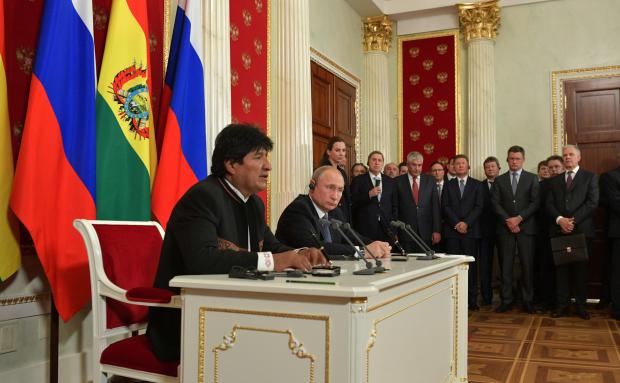 Time and again, Russia stressed that it supports the sovereign independence and territorial integrity of other countries.

On Monday, its Foreign Ministry denounced the toppling of Bolivia's Evo Morales, a statement saying:

"We are alarmed by the dramatic developments in Bolivia, where a wave of violence, unleashed by the opposition, has prevented President Evo Morales from completing his tenure of office," adding:

"We are deeply concerned that the government's readiness to search for constructive dialogue-based solutions, voiced during the domestic political crisis in the country, was wiped out by developments typical of a well-orchestrated coup d'etat."

Russia clearly knows it was made in the USA, Trump regime hardliners OKing it, CIA dirty hands all over events leading up to Bolivia's October presidential election and its violent aftermath, toppling democratically elected Evo Morales, forcing him to resign and seek refuge in Mexico to avoid assassination.

Russia's Foreign Ministry said it supports "guaranteeing the rights of all (Bolivian) citizens and ensuring the socioeconomic development of that country."

Time and again, Moscow voiced strong opposition to interference in the internal affairs of sovereign states by foreign powers — clearly what happened in Bolivia.

There was no constitutionally required legislative quorum in session when Jeanine Anez swore herself into power — illegally usurping it.

She got scant support in Bolivian legislative elections. Most people in the country knew nothing about her. Morales' Movement for Socialism MPs were warned not to show up for the parliamentary usurpation, unconstitutionally anointing her president.

Her power grab with support from the US, Bolivia's military, and fascist politicians is what despotism is all about.

Despite calling what happened in the country a coup d'etat, Russian Deputy Foreign Minister Sergey Ryabkov said the following on Thursday:

"(I)t is clear that (Anez) will be perceived as the head of Bolivia until a new president is elected, and this is the internal affair of Bolivia."

Moscow has commercial interests in the country. In March 2016, it signed an agreement with Morales' government to build a $300 million nuclear center in El Alto, a city near La Paz, Bolivia's political capital.

Reportedly it'll include a research reactor, a cyclotron for radio-pharmaceuticals, and a multi-purpose gamma irradiation plant, along with facilities for research in energy, medicine, and agriculture.

At the time, Morales said "(o)ur brother President Vladimir Putin has promised me the transfer of Russian know-how and technology."

According to mining.com, Bolivia has "around 25% of the known (lithium) reserves, but so far it has done nothing with it." Other estimates indicate a greater percentage of world reserves in the country, an invaluable resource if developed.

The mineral has numerous industrial applications, along with its use in producing a mood-stabilizing drug in treating bipolar disorders.

At the time, his government said it "invested huge amounts to ensure that lithium is processed within the country to export it only in value-added form, such as in batteries."

With Trump regime-supported anti-Morales hardliners in charge, Bolivian agreements with Russia and China could be scrapped in favor of US business interests.