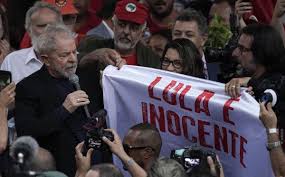 On Friday, former Brazilian President Luiz Inacio Lula da Silva was released from prison, pending resolution of his appeal against charges he and his legal team call phony.

Brazilian Judge Danilo Pereira ordered his release in response to a request by his defense team. His Twitter account released a video of his release holding a banner with supporters saying: "Lula innocent." Separately he tweeted: Lula free."

Convicting and imprisoning him was and remains all about preventing him from seeking reelection last year.

If allowed to run, he likely would have handily defeated US-supported hardline, pro-business, anti-populist Jair Bolsonaro.

In 2016, US dark forces conspired with Brazilian fascists to wrongfully impeach and remove democratically elected President Dilma Rousseff from office.

At the time of Lula's conviction, his lead attorney Valeska Texeira Zanin Martin said "(n)o credible evidence of guilt has been produced, and overwhelming proof of his innocence blatantly ignored," adding:

"This politically motivated judgement attacks Brazil's rule of law, democracy and Lula's basic human rights. It is of immense concern to the Brazilian people and to the international community."

Bank and real estate records proved Lulu's innocence, she stressed. Prosecutor Henrique Pozzobon virtually admitted long knives were out to get Lula, saying: "We don't have to prove…We have conviction."

Lula was acquitted of "imputations of corruption and money laundering involving the storage of presidential stock for lack of sufficient proof of materiality." Other dubious charges against him remain outstanding.

Martin vowed to prove Lula's innocence on all charges against him, adding she intends getting them all reversed.

His Friday release pending resolution of his appeal came after spending 580 days in prison — to smooth the way for continuation of fascist rule in Brazil.

If unable to reverse dubious charges against him, he'll be re-imprisoned to serve out the remainder of his eight year/10 month sentence.

Interviewed last April in prison, he denounced the Temer and Bolsonaro regimes, saying:

"Does anyone really think the US is going to favor Brazil? Americans think of themselves first, second, third, fourth, fifth – and if there's any time left over, they think about Americans. And these Brazilian lackeys go around thinking the Americans will do anything for us."

"(W)e can't have (a) country being run governed by a bunch of lunatics (and US) lackeys…The country doesn't deserve this and above all the people do not deserve this."

Unless exonerated, Lula can be barred from seeking elected office again. His tenure as president from 2003 — 2010 was no paragon of progressive governance.

But it was a far cry from fascist rule under Temer and Bolsonaro, serving privileged interests at the expense of ordinary people, exploited to benefit them — at the same time, returning Brazil to US colonial status.

Turkey and Azerbaijan Want War on Nagorno-Karabakh, Not Resolution