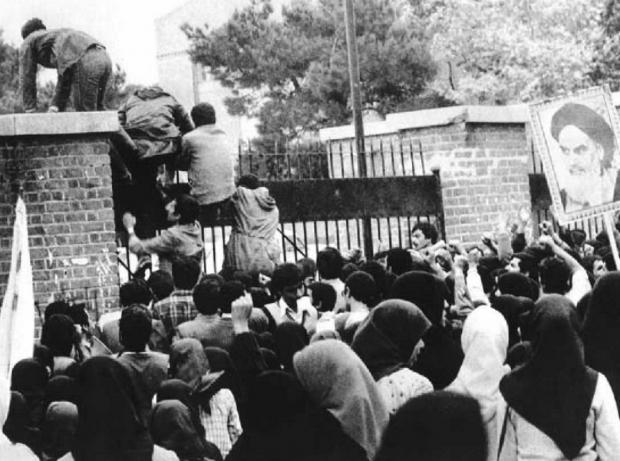 A same-day article discusses 40th anniversary of the nonviolent takeover of the US embassy in Tehran on November 4, 1979 by Iranian students.

The embassy takeover was nonviolent, ridding the country of a "den of espionage," 52 staff members held for 444 days, none mistreated, 14 US women and African Americans at the time released unharmed.

To this day, the official narrative echoed by establishment media turns truth on its head about events at the time.

A spokesperson for Iranophobe/neocon hardliner Pompeo said he'll "host (a Monday) event honoring the service and sacrifice (sic) of the former hostages on the 40th anniversary of the US Embassy takeover in Tehran," adding:

"This event commemorates the bravery that all former hostages and their families have shown during unimaginable circumstances (sic)."

"We look forward to the day when we can again safely send US diplomats to Tehran (sic). (T)his anniversary serves as a reminder of the long history of malign behavior by (Iran) and the danger it has posed to the United States and the world over the past 40 years (sic)."

Fact: The above statement ignored a generation of US installed fascist tyranny in Iran — from the CIA's first ever coup in 1953 to Iranian liberation from US repressive control and exploitation in 1979.

Fact: There was nothing "brave" about well-treated US captives, nothing violent about the embassy's takeover.

Fact: CIA spies, masquerading as "diplomats," are unwanted in Iran.

Fact: "Malign" describes US behavior worldwide, not how the Islamic Republic operates.

The NYT published an AP News report about the November 4, 1979 embassy takeover in Tehran, saying:

Iranian "(l)awmakers…approv(ed) the outline of a bill that would include anti-American teachings in school textbooks."

The measure calls for truth-telling about US imperial lawlessness, wanting Iranian children and youths aware of what's suppressed in the West.

AP News: "What exactly led to the 1979 takeover of the embassy was obscure at the time to Americans who for months could only watch…TV newscasts showed Iranian protests at the embassy."

Fact: Establishment media reported the falsified official narrative about what happened and why. To this day, the vast majority of Americans know nothing about the root cause of the Iranian revolution or why the US embassy was taken over.

The neocon/CIA house organ Washington Post reported nothing about the US den of espionage infested with Langley spies, masquerading as its embassy in Tehran.

"The decision to jail our diplomats has cast a 40-year shadow over our relations with the regime, which still takes innocent Americans hostage and uses them for political gain (sic)."

Fact: No one was "jail(ed)," no one mistreated, no "innocent Americans (held) hostage and use(d) for political gain" — a longstanding US specialty at home and abroad, including countless numbers of political prisoners, others held captive in torture prisons.

WaPo: "Over the years, a succession of American and Iranian presidents took tentative steps to put relations on a better footing. Usually their efforts came to nothing, further entrenching the mutual mistrust."

US duplicity and betrayal bears full responsibility, what WaPo and other establishment media never explain.

"Since a mob of Iranian students (sic) during the 1979 Islamic Revolution climbed the walls of the American Embassy in Tehran and took 52 diplomats hostage for 444 days, Iran has routinely imprisoned foreigners, including Americans (sic)."

What the Journal called a "mob" was comprised of nonviolent, calm, orderly youths, harming no one.

Detaining individuals worldwide as "political pawns" is longstanding US practice, part of what the scourge of imperial viciousness is all about.

It's how the US mistreats all sovereign independent nations, wanting them colonized and controlled as vassal states, preemptive wars and economic terrorism its favored strategies.

That's what the scourge of US imperialism is all about — humanity's greatest threat.