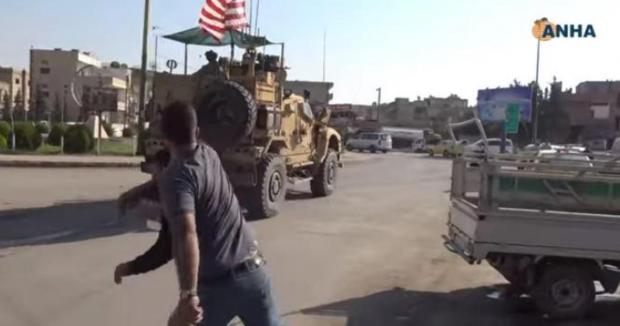 ISIS Benefits from US Syria Pullout?

In its latest edition, the NYT falsely claimed that "ISIS reap(ed) gains of (the) US pullout from Syria."

Throughout years of US aggression, the Times lying machine called the conflict "civil war" — despite nothing remotely "civil" about it.

The self-styled newspaper of record pretends US forces are combatting the scourge of ISIS Washington created and supports in Syria and other US war theaters.

The Times: "The (US) troop withdrawal ends American operations against the terrorist group conducted jointly with a Kurdish-led militia."

Fact: The so-called US withdrawal from Syria is partial, Pentagon troops and CIA operatives continuing to control northern and southern parts of the country.

Fact: There's no US operation against ISIS anywhere, its fighters used by the Pentagon and CIA as imperial proxies, along with likeminded terrorist groups.

Fact: The "Kurdish-led" Syrian Democratic Forces (SDF) include YPG traitors and Arab terrorists, nothing remotely democratic about their anti-government operations.

The Times: "American forces and their Kurdish-led partners in Syria had been conducting as many as a dozen counterterrorism missions a day against Islamic State militants…"

Fact: The US and its proxy foot soldiers include ISIS and other cutthroat killer jihadists — responsible for CW incidents and other atrocities throughout the war, falsely blamed on Damascus.

The Times: When "Trump (said he'd) pull (US) troops out of northern Syria and make way for a Turkish attack on the Kurds…many warned that he was removing the spearhead of the campaign to defeat…ISIS."

Fact: No such "campaign" ever existed in Syria or anywhere else, the Times part of the propaganda operation pretending otherwise.

The Times: "(A)nalysts say…Trump's pullout has handed the Islamic State its biggest win in more than four years and greatly improved its prospects."

"With American forces rushing for the exits, (US) officials said…they were already losing their ability to collect critical intelligence about the group's operations on the ground."

Fact: The above claims are mumbo jumbo rubbish, part of ongoing propaganda war, suppressing vital truths about US aggression in Syria and elsewhere — the Times and other establishment media acting as Pentagon/CIA press agents, proliferating disinformation and fake news.

The Times: ISIS is "on the upswing…carrying out assassinations, suicide attacks, abductions, and arson of crops in both Iraq and Syria."

Fact: Atrocities by ISIS and other terrorist groups in Syria and elsewhere are orchestrated and directed by the Pentagon and CIA against nations targeted for regime change.

Fact: The US, its imperial allies, and terrorist foot soldiers, bear full responsibility for endless wars, related violence, chaos, and human suffering in Syria and other targeted countries.

Fact: There's no end of it in prospect because peace, stability, equity, and justice defeat US imperial aims.

Syria remains occupied by unknown number of US special forces and other combat troops.

No near-term prospect for restoration of peace and stability exists in all US war theaters because Washington and its imperial allies want endless aggression continued.

Times reports are part of Pentagon/CIA deception about what's going on in Syria and other US war theaters — hard truths about US aggression suppressed.

Get Out Of Syria

To Capture and Subdue: America's Theft of Syrian Oil Has Very Little To Do With Money