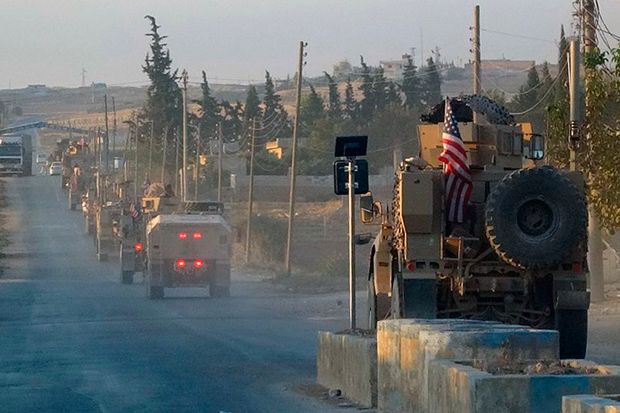 US Syria Pullout? A Saigon Moment?

The 1972 Church/Case amendment ended congressional funding for US military operations in Southeast Asia — except for withdrawal of Pentagon forces, subject to release of prisoners of war.

In June 1973, congressional legislation ended all funding after August 15. After escalating Southeast Asia war to Cambodia and Laos, wanting it ended was a key reason why US dark forces sought Nixon's removal from office.

On April 30, 1975, US forces completed their withdrawal from the rooftop of its Saigon embassy, ending over a decade of aggression against a nonbelligerent state threatening no one.

The 1964 Gulf of Tonkin Resolution authorized war without declaring it, based on a false flag incident.

All wars are based on Big Lies and deception. Truth and full disclosure would destroy pretexts for launching them.

Congress can end all US wars of aggression today the way lawmakers acted in the 1970s by cutting off funding without which they can't be waged.

Congressional profiles in courage are few and far between — Tulsi Gabbard the only anti-war/progressive presidential aspirant for world peace, stability and social justice in either wing of the one-party state.

The vast majority of House and Senate members support endless US wars. Since the Clinton co-presidency's rape of Yugoslavia, countless trillions of dollars were spent for militarism, warmaking, and the Pentagon's global empire of bases, used as platforms for war if ordered — at the expense of vital homeland needs and eroding social justice.

The US came to all its war theaters to stay — directly the way Douglas MacArthur ran Japan from 1945 - 1951, by installing puppet regimes serving its interests, or a combination of both strategies as in Afghanistan and Iraq, their people exploited and otherwise abused.

According to US war secretary Mark Esper, Pentagon forces in northern Syria aren't coming home. They're being redeployed cross-border to (occupied) Iraq.

US troops illegally occupying and controlling southern areas in Syria near the Iraqi and Jordanian borders remain in place.

Esper falsely claimed that redeployed US forces to Western Iraq will protect the country and combat ISIS, saying:

The plan "is to help defend Iraq (sic) and…to perform a counter-ISIS mission (sic) as we sort through the next steps. Things could change between now and whenever we complete the withdrawal, but that's the game plan right now."

Asked if US special forces will remain in Syria after the northern cross-border redeployment, Esper said it's an option to be discussed with US (imperial) allies, adding: "(W)e have to work through those details."

Since Bush/Cheney's 2003 Iraq aggression, US forces continue to illegally occupy and exploit the country, a puppet regime serving its interests.

Along with al-Qaeda, its al-Nusra offshoot in Syria, and likeminded terrorist groups, the US created ISIS, supporting the scourge as proxy troops it pretends to combat — backed by Pentagon-led terror-bombing, including destruction of vital infrastructure in Syria and elsewhere.

It's part of a greater US/NATO/Israeli strategy to redraw the Middle East map, what the scourge of imperialism is all about, including horrendous human rights abuses against affected populations.

The road to Tehran runs through Damascus. In August 2011, Michel Chossudovsky explained the following:

"The Syria Accountability and Lebanese Sovereignty Restoration Act of 2003 (falsely)  categorizes Syria as a 'rogue state,' as a country which supports terrorism," adding:

"A US-NATO sponsored war on Iran would involve, as a first step, a destabilization campaign ('regime change') including covert intelligence operations in support of rebel forces directed against the Syrian government."

"An extended Middle East Central Asian war has been on the Pentagon's drawing board since the mid-1990s."

"As part of this extended war scenario, the US-NATO alliance plans to wage a military campaign against Syria under a UN sponsored 'humanitarian mandate.' "

Things haven't gone as planned, mainly because of Russia's September 2015 intervention at the request of Damascus to aid its military combat US-supported terrorists.

Moscow's involvement changed the dynamic on the ground, preventing Washington from gaining control of Syria and isolating Iran regionally.

Most of the country was liberated from US-supported terrorists, Idlib province controlled by thousands of al-Nusra jihadists the main exception.

US tactics for controlling Syria changed because of Russia's involvement, not its war party's imperial objectives — aiming for unchallenged regional control by replacing sovereign governments in the Syrian Arab Republic and Iran with pro-Western puppet regimes, similar to US control of Afghanistan and Iraq.

That's where things now stand. Russia foiled the best laid US plans. Yet bipartisan policymakers in Washington support endless war, rejecting restoration of peace and stability to Syria and other US war theaters.

It's further evidence of endless US-led war in Syria — begun nine years ago next March with no near-term prospect for resolution.

There are world's apart differences between US 1960s/70s Southeast Asia war and its involvement in Syria today.

Notably, there were hundreds of thousands of Pentagon forces involved in Vietnam combat, thousands returned home in body bags, reported by US media — especially by CBS News anchor Walter Cronkite.

On February 27, 1968 at the end of his nightly newscast, he editorialized on air for three minutes against the war, ending his anti-war commentary, saying:

"(I)t is increasingly clear to this reporter that the only rational way out…will be to negotiate, not as victors, but as an honorable people…This is Walter Cronkite. Good night."

At the time, Lyndon Johnson said if he lost Cronkite, he lost middle America. Shortly afterwards, he announced that he wouldn't seek reelection in November 1968.

No Walter Cronkites in the US report on air or in print today, a major difference between earlier and now.

The main difference between both eras is how Washington wages wars — earlier with US combat troops on the ground in large numbers through Bush/Cheney's 2003 Iraq aggression.

Since then, ISIS and other terrorists serve as US proxy forces, small numbers of Pentagon troops supporting them, along with terror-bombing by US and allied warplanes.

In addition, reporters are embedded with US troops in various venues, their war reporting amounting to Pentagon press releases.