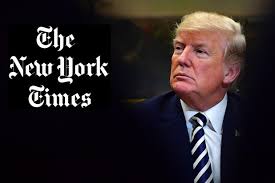 Hostile to peace, equity and justice, the record of the self-styled newspaper of record is shameful — its daily editions filled with malign rubbish on major issues, truth-telling banned.

Its management and editorial staff are conducting an anti-Trump crusade for manufactured reasons, ignoring legitimate ones to bash him and demand accountability.

Nearly the entire US political establishment, past and present, is culpable for similar offenses, notably endless wars of aggression, corporate favoritism, social justice erosion, and police state harshness for enforcement.

Ignored was their alliance with US aggression against Syrian sovereignty and territorial integrity, along with pretending to combat the scourge of ISIS they supported — until allying with Damascus following Trump's betrayal and launch of Turkish cross-border aggression.

Throughout years of Obama's war in Syria, now Trump's, Times reporting has been some of the most appalling rubbish in modern memory — a steady stream of disinformation, Big Lies, and fake news, truth and full disclosure about US imperial aims suppressed.

US wars in multiple theaters, past and current post-WW II, have been and continue to be naked aggression against nonbelligerent states threatening no one — the highest of high crimes supported by the Times, making it complicit in criminality by operating as a Pentagon press agent.

Pseudo-journalist Thomas Friedman is one of its worst — a shameful figure best known for willful deception, reinvented history, and worthless rubbish not fit to print.

His latest propaganda piece is typical of his subservience to powerful interests at the expense of truth-telling.

Instead of denouncing the failed Russiagate/ongoing Ukrainegate witch hunts with no legitimacy, he lied claiming the anti-Trump "impeachment process was not set in motion by" Dems.

Truth is polar opposite. The party's leadership conspired with rogue CIA operates against DJT for the wrong reasons.

One or more self-styled Langley "whistleblowers" are character assassins, using hearsay material against him, perhaps bribed by the get Trump crowd to go along with the scam for special benefits received.

They're not "public servants" as Friedman mischaracterized them. They're back-stabbing traitors to honor and the rule of law.

Friedman: "(I)f Trump is removed from office and the country is healed afterward (sic), it will only be because a majority of Americans understand that this is, at its core, a fight between these noncorrupt, apolitical civil servants (sic) — whose norms and institutions make America's government so envied and respected around the world (sic) — and Giuliani and Trump and their pals, who care only about serving themselves and their conspiracy theories (sic)."

No responsible editors would touch the above rubbish. Times editors featured it.

Fact: Washington's debauched criminal class is bipartisan, Dems more corrupt than the other wing of duopoly subservience to the nation's privileged class, exploiting most others.

The same goes for the NYT-led establishment media, a collective lying machine/propaganda instrument/press agent for powerful interests — journalism the way it should be long ago abandoned, many in their ranks operating as covert CIA collaborators, pocketing blood money for their services.

Friedman: "Trump and his enablers…don't want Americans to understand that this fight is about guarding the most cherished norms and institutions that define us as a nation (sic)."

They include raping and destroying one nation after another, operating the world's largest gulag prison system, including global torture black sites, transferring the nation's wealth from ordinary people to its privileged class, cracking down hard on nonbelievers by police state viciousness — among countless other breaches of international and US constitutional law Friedman and the Times lying machine ignore.

Its management and editors focus on manipulating the public mind, brainwashing it, filling it with rubbish, suppressing what's vital to report on major issues.

That's the deplorable record of the self-styled newspaper of record.

Because of its global reach, it's essential to set the record straight on how it betrays the public trust.