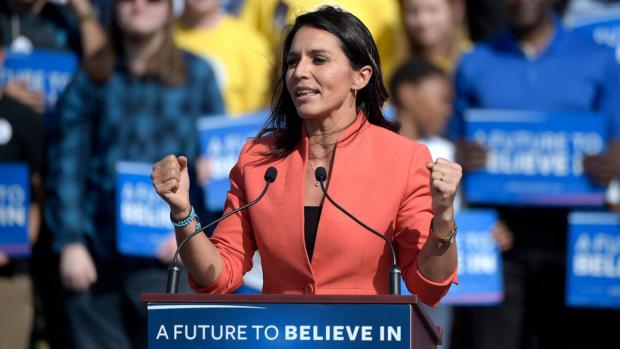 Tulsi Gabbard, the Only Anti-War Progressive US Presidential Aspirant

Gabbard deserves praise for being anti-war and on the right side of other major issues.

Her "vision for America" includes world peace over endless US wars, no longer "supporting allies and partners of al-Qaeda, ISIL, Jabhat Fateh al Sham and other terrorist groups with money, weapons, and intelligence support, in their fight to overthrow the Syrian government."

She supports Medicare for all and other social justice policies over neoliberal tyranny harming most Americans.

Political rhetoric is one thing, following through another entirely. Time and again, candidates promise one thing, then go another way if elected — notably true of the Clintons, Bush/Cheney, Obama, Trump, and congressional leadership, betraying the public trust in office time and again.

That said, Gabbard alone among US presidential aspirants wants "trillions of dollars on regime change wars in the Middle East" and elsewhere ended.

She calls for using the nation's resources for "affordable housing, (fixing) aging infrastructure…invest(ing) in education, healthcare, and so much more."

Her Stop Arming Terrorist Act prohibits direct and indirect US support for ISIS and other jihadists.

She opposes Trump's trade war with China, his regime's economic terrorism on Iran and Venezuela, his JCPOA  pullout, along with US interventionist policies against any sovereign state.

She's against legislation that "restrict(s) freedom of speech by imposing legal penalties against those who participate in the BDS movement."

She called all anti-government forces in Syria and elsewhere terrorists, not moderate rebels, stressing "(t)hat is a fact."

She said "issues of war and peace" are central to her campaign, describing herself as an anti-war/anti-Trump progressive.

Undemocratic Dems, other US dark forces, and establishment media consider her unfit for high office for being anti-war/pro-social justice.

Unfairly denied participation in September's Dem debate, she was one of 12 party aspirants in the October 15 one, her remarks alone noteworthy Tuesday night.

She slammed the NYT/CNN lying machines. Calling them neither neutral or objective, she accused them of disigracefully "smear(ing) and call(ing) (her) a traitor."

CNN, the most distrusted name in television propaganda masquerading as news, shamefully called her "a puppet for the Russian government."

The channel and other US establishment media operate as press agents for imperial wars, Wall Street, and other corporate interests.

They're unapologetically hostile to peace, equity, justice, and journalism the way it should be.

The above and volumes more like it is typical Times disinformation and fake news. In virtually all its editions, the NYT feature "news that's" unfit to read.

Gabbard's agenda is progressive and anti-war — notions the Times, CNN, and other establishment media abhor.

Tune them out! Avoid their on air and print rubbish! Follow credible independent media exclusively, mainly online, the only way to be informed.

Some of Gabbard's Tuesday night remarks were as follows:

"(H)yperpartisan (calls for impeaching Trump) began shortly after (his) election. (A)s unhappy as that may make us (Dems), he won that election in 2016."

To her discredit, she supports the politicized impeachment inquiry, a Ukrainegate spinoff from the failed Russiagate scam.

At the same time, she said if House impeachment isn't followed by removal from office by Senate members, it'll "further (deepen) the divides in this country that we cannot afford."

The real divide is between privileged Americans and vast majority of others, exploited and otherwise mistreated so monied interests can benefit — fascist tyranny wrapped in the American flag.

Gabbard: A "universal basic income is a good idea to help provide that security so that people can have the freedom to make the kinds of choices that they want to see."

"(B)ad trade deals (like NAFTA harm ordinary Americans, compromising their ability to) provide for their families."

"(W)hat we need to do is look at how we can best serve the interests of (all) the American people" — not just the privileged few.

She strongest remarks were as follows, denouncing Turkish "slaughter of the Kurds," calling it "another negative consequence of the regime change war that we've been waging in Syria," adding:

"Donald Trump has the blood of the Kurds on his hand, but so do many of the politicians in our country from both parties who have supported this ongoing regime change war in Syria that started in 2011, along with many in the mainstream media, who have been championing and cheerleading this regime change war."

"Not only that, but the New York Times and CNN have also smeared veterans like myself for calling for an end to this regime change war."

"Just two days ago, the New York Times put out an article saying that I'm a Russian asset and an Assad apologist and all these different smears."

"This morning, a CNN commentator said on national television that I'm an asset of Russia. Completely despicable."

"As president, I will end these regime change wars by doing two things — ending the draconian sanctions that are really a modern-day siege the likes of which we are seeing Saudi Arabia wage against Yemen, that have caused tens of thousands of Syrian civilians to die and to starve, and I would make sure that we stop supporting terrorists like al-Qaida in Syria who have been the ground force in this ongoing regime change war."

"I'd like to ask Senator Warren if she would join me in calling for an end to this regime change war in Syria, finally."

Warren, Sanders, Biden, and other undemocratic Dems are on the wrong side of most major issues, their voting records belying their rhetoric.

It's what he, Biden, Warren, Sanders and the others are saying — talking peace while supporting endless wars of aggression, including Israeli state terror against Palestinians, Gabbard the only real peace candidate.

The real question needing to be asked and answered is "(w)ho is fit to serve as our commander-in-chief," Gabbard stressed, adding:

"This is the most important responsibility that the president has. What Donald Trump has been doing in Syria, and what we have just seen with him, inviting Turkey to come in and slaughter the Kurds, show what an unfit president looks like."

"It highlights how critical it is that we have a president and commander-in-chief who is ready on day one, bringing experience and understanding in foreign policy and national security."

"I understand the importance of our national security. I am prepared to do this job, to fulfill this responsibility as commander-in-chief on day one."

CNN co-host Erin Burnett cut Gabbard off from asking the other Dem candidates where they stand on war and peace and what credentials do they have to serve as commander-in-chief — saying: "We're going to take (a) break now."

What's needed are real debates, , hosted by apolitical independent organizations, not scripted ones, featuring slogans and one-liners over solutions, along with promises made to be broken by most aspirants if elected.

Independent candidates should either be invited to participate or given equal nationally televised airtime to air their views.

The US is a one-party state with two right wings, Gabbard an exception to the rule — why she has virtually no change of being Dem standard bearer in November 2020.