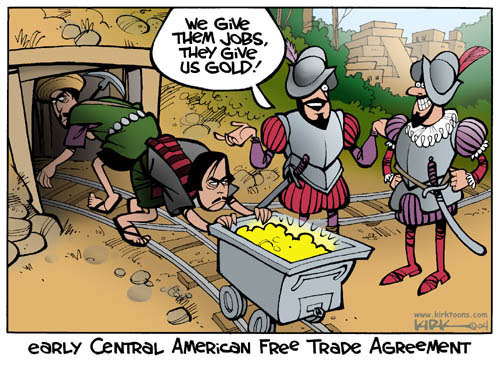 Mexicans for holydays. Americans for the dollar

If, during the 18th century, we had been able to take a look of England and Spain, the superiority of the former would leave us speechless, and we would also observe that this difference was not confined to the European region. The English colonies in America had far exceeded the power of the Spanish ones. Because at the beginning of the 16th century it was clear that the Castilian, in all aspects, was not at the level of the English citizen. Historians agree that the north owed its great civilization and prosperity to the moral effect of the Protestant Reformation, and the decline of southern Europe was adjudicated by the resurgence of the Catholic Church

Thus were born two uneven prints. The Uruguayan writer, Rodó, using the Shakespearian dichotomy, described Latin Americans as delicate, sentimental, dreamy, spiritual, noble and of great moral purpose. And to the Americans as vulgar, vain, with contempt for art, rejecting any thought that was not directed at a practical objective. For them, science was necessary research preceded by a utilitarian application. That is, on the one hand, dreamers dedicated to the world of beauty, the spiritual. On the other, the rude and aggressive fortune seekers, compulsive in their work, without wasting time on unproductive, competitive things, whose final objective was defined by one of them; "Be obscenely rich."

With these very contrasting profiles both colonies had begun their settlements in the new world and, by the end of the 19th century, the comparison became even more contrasting. While sentimental Mexicans dedicated themselves to dreaming composing "corridos", celebrating birthdays, the vulgar Americans worked and participated leading the industrial revolution.

Classical liberal ideas were consolidated in the US and in northern Europe. This would lead to the creation of more wealth in the 19th century than that generated in the previous thousand years. The English colonies applied them in a radical way and thus they were born of a liberal revolution against the empire, taxes, monopolies, regulations, and the excess of power of the executive. They went on to structure a government with their navigation map indicating the route: no debt, no federal taxes or consumption taxes, no import fees. An executive with very limited functions, minimum levels of taxes and expenses, without a license to control or regulate; a private, free banking system, and a strong, anti-inflationary currency.

At the same time, a destructive storm exploded in independent Mexico that caused the establishment of two empires, in which both emperors ended up shot just like the father of the country. The 19th century would witness wars, proclamations, pronouncements, constitutions, coups. Octavio Paz wrote: "With similar rhetoric the wars of independence and constitutions of the new countries of Latin America, the result was the continuity of the archaic political, social structures, and injustice of the colonies. The independence of Mexico was a manifestation of the Spanish and Arab traditions of patrimonialism that created our caudillismo that continues to dominate the country. "

The Mexican conservatives were centrists, protectionists, pro church. The liberals carried the humanist visions (not the economic ones) that caused the French and American revolutions. The conservatives, infected with the virus of the Ibero-Catholic culture antagonistic of progress, were not able to provoke it. The liberals could not capture that elusive development either because they were captives of the same culture, and both sides were incapacitated. The equality of the American liberals was equality before the law, but the Mexicans deformed it with their impossible class egalitarianism, cause of serious problems. With the advance of the 19th century it was already very clear that independence was not a guarantee of prosperity or stability for Mexico, and half of the country was lost in that whirlpool.

Both arrived in the 20th century and the best definition of the US was made by Mises in 1926: "The EU has become the richest and most powerful country in the world, through an economic system that does not set limits on the individual's freedom to go in search of his dreams, which has caused the development of the great productive apparatus of the nation. Its unprecedented wealth is not the result of its natural resources, but of the economic policies implemented to take advantage of the opportunities that these resources offer. They have never subsidized poorly implemented projects or lack of viability, they have supported competition, efficiency, productivity and freedom. "

In that same decade, the Sonoran hegemony with Alvaro Obregón took the presidency of a destroyed country, and in the background, Elias Calles waited with the tools of mercantilism and socialism to again chain us. The historian Lawrence Harrison described us like this: "Already mounted in the 20th century, it is difficult to avoid the conclusion that, although apparent modernization, Mexico has been a resounding failure. He has denied his people adequate education, economic opportunities that are only achieved in free markets, justice in a judicial system where political influence and money always win. It has created a blocked economy. His intellectuals have dedicated themselves to blaming the United States for all its ills. One day, Mexico lost its freedom and has not missed it for a century. "

Why the differences? Culture and bad ideas.

For the Mexican, time does not matter and is always late. It lacks the strength to give up the heat of the sheets. That's why in his life everything is late or never arrives. See the future with fatalism and already predetermined. But there is always one that he considers to be predestined not to suffer nor bear. Nothing can be true if it is not declared by him. The Valley of Tears is not for him, it is for the sheep that takes him along the tearless uncrowned path to power. He wears jackets of very wide shoulder pads, but he has no broad shoulders nor narrow waist, and his pants are too long. It simulates what it is not and deep down it is its own disappointment.

He hates the gringo who stole half of his territory. We are screwed and they are to blame. They are to blame for everything negative, everything low and cruel, because their tiny mind has shrunk even more for their hatred. Work is punishment and inheritance of Adam when God expelled him from paradise. He was educated in the barbershop where he finds the substitute of the academy. There he can shine supporting opinions against his professor, the barber. With the first books he was left without God, then without a country, finally without a mother. He is the classic politician to be that gives more noise to belching and strength to yawning. And against stupidity, even the gods fight in vain. Because this predestined someday will come to power and, with the philosophy of his soap operas and his barber, take control of the country to continue operating at a loss. And so, we continue.

The Tortured Legacy of the Mexican-American War, Part 1

Another cross-border tunnel found in Arizona

If the coronavirus makes it to Mexico, open borders will ensure a pandemic in the USA… and sanctua