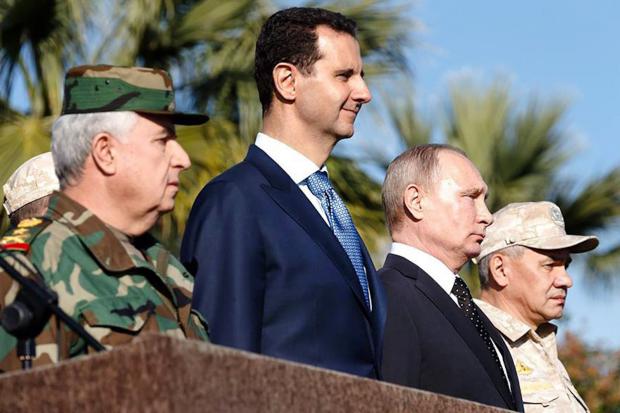 Mixed Messages from Russia on Syria

Since 2012, Kremlin efforts have gone all-out to restore peace and stability to the country, so far unattained despite most areas liberated from US-supported terrorists.

It's because the US occupies and controls 30% of the country, won't leave, and wants endless war for regime change continued.

Cooperating with the Obama and Trump regimes on Syria and other geopolitical issues by Russia consistently failed to produce positive results.

Nor is future cooperation likely to turn things around with a nation bent on transforming Russia into a vassal state, its resources plundered, its people exploited, a scenario similar to devastating 1990s shock therapy under US puppet Boris Yeltsin.

Kremlin support for Syria is tainted by de facto support for Turkish cross-border aggression — based on Big Lies and deception.

"They call upon Turkey to halt its military operation and to make full use of diplomatic channels to address its security concerns."

What's going on? Russia can't be for peace and war in the same country at the same time.

Failure to denounce Turkish aggression supports it. There's no in between. Russia's mixed messages makes conflict resolution all the harder.

Turkish aggression is more greatly destabilizing Syria overall. Supporting it by Russia mocks its call for US and allied forces to leave the country.

Lavrov blamed Trump for Turkey's invasion by green-lighting it and redeploying US forces in northeast Syria away from territory Ankara seeks to control.

He accused the Trump regime of "contradictions (that) could ignite the entire region" while ignoring Russia failure to denounce what's going on, effectively giving Erdogan its own green light for cross-border aggression.

Until Erdogan's breach of the Russia, Iran, Turkey Astana agreement, these countries were at least nominally allied in seeking restoration of peace and stability to Syria.

They formed a trilateral mechanism for furthering these objectives and monitoring ceasefires.

They agreed to continue combating ISIS and al-Nusra, as well as other groups breaching the ceasefire, stressing conflict resolution is only possible diplomatically.

Following days of Turkish aggression, the Astana initiative is in tatters.

Ankara breached Syrian sovereignty. Its aggression is all about seeking to annex its territory.

Establishing a so-called "safe zone" in areas bordering both countries has nothing to do with helping Syrian refugees return home, nothing about enhancing Turkey's security, everything to do with Erdogan's revanchist aims.

Putin spokesman Dmitry Peskov ignored reality on the ground, saying Russia supports "Turkey's right to ensure it security" at a time when its only threats are invented, not real.

"This is true for everyone. If Syria's new legitimate government chooses to say that they have no more need for Russia's military presence, this will be just as true for Russia."

"Syria must be free from other states' military presence. And the territorial integrity of the Syrian Arab Republic must be completely restored."

Given the above remarks, similar to ones he made before, why did he OK Turkey's cross-border aggression — unrelated to phony national security threats?

Why did his government fail to denounce it? Why did he instruct his UN envoy to veto EU condemnation, then block a similar statement the next day?

Syria has been ravaged by US-led aggression since early 2011. Turkey's cross-border invasion makes restoration of peace and stability to the country all the harder.

From one direction, they're terrorized by Turkish troops, from another direction facing the scourge of US-supported jihadists.

Get Out Of Syria