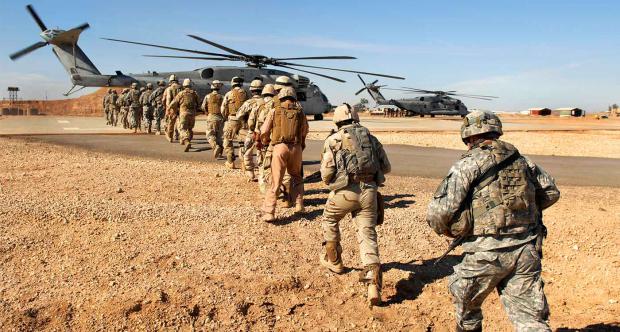 Reports about Trump regime withdrawal of US forces from Syria are greatly exaggerated, thousands more Pentagon troops to the region ordered.

On Friday, US war secretary Mark Esper's spokesman said he "authorized the deployment of additional US forces and the following equipment to the Kingdom of Saudi Arabia." including:

Nominally "to assure and enhance the defense of Saudi Arabia," unexplained was that the kingdom's only foreign threats are invented or caused by partnering with US aggression in Yemen.

Since May, US Middle East forces were increased by 14,000, the war department statement added.

Waging endless wars in multiple theaters, the statement falsely claimed the US "does not seek conflict with" Iran — while all-out Trump regime economic terrorism seeks to crush its economy and starve its people into submission, Nuremberg-level high crimes left unexplained.

Iran is the region's leading proponent of peace and stability, seeking cooperative relations with other countries, confrontation with none.

"We can, collectively, choose to remain on this path of instability and tension, and await the unknown. Or, we can instead choose peace, security, stability and prosperity for all."

President Rouhani proposed it in his UN General Assembly address last month, stressing Iran threatens no one. It rejects intimidation and threats.

It's committed to combat terrorism, not support or spread it like Washington and its imperial allies. It seeks cooperative relations with other nations.

He urged regional countries "to commit to respect each other's sovereignty and territorial integrity, the inviolability of our international borders, and the peaceful settlement of disputes. We should categorically reject any threat or use of force or participation in coalitions against each other."

"We can begin with — or work towards — the signing of a Hormuz Community Non-Intervention and Non-Aggression Pact."

"We can set up joint task forces to come up with practical steps towards these objectives and gradually build confidence and expand co-operation."

Peace and stability defeats US imperial aims. Endless hot wars and by other means, along with chaos, serves them.

Deploying thousands more US troops to the Middle East, already boiling from its aggression, likely assures continuing or increasing it in multiple theaters, not stepping back from the brink toward resolution anywhere.

Zarif quoted poet Rumi saying 800 years ago: "Out beyond ideas of wrongdoing and right-doing there is a field. I'll meet you there."

There's virtually no chance that US hardliners will show up other than with swords drawn and guns blazing.

On Friday, Esper falsely blamed Iran for striking key Saudi oil facilities last month — despite no evidence suggesting it, Yemeni Houthis explaining they carried it out.

Esper falsely claimed thousands more US troops, weapons, and military equipment to the Middle East are "to deter and defend (against) the Iranians."

On the same day, a National Iranian Tanker Company (NITC) vessel was reportedly struck by one or more missiles or rockets in the Red Sea near Jeddah, Saudi Arabia.

Despite heavy damage, its crew is reportedly safe, the vessel stable, and heading toward Iran's Larak island.

An investigation is underway to determine responsibility for the attack. Was Israel behind what happened?

On October 10, Netanyahu suggested he might order a preemptive strike on Iran — falsely claiming a threat from the country that doesn't exist.

Iranian authorities will likely get to the bottom of what happened. More of the same could come any time.

Adding that the Trump regime is "commit(ted) to providing stability in the region" is belied by its endless aggression in multiple theaters, along with economic terrorism on Iran — all of the above the highest of high crimes.