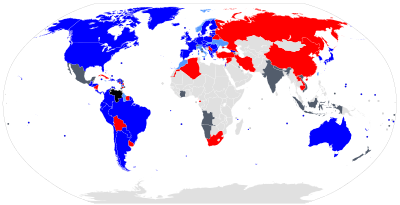 He praised President Xi Jinping as his "best and bosom friend," cherishing their "deep friendship."

"The contemporary history of China is a succession of outstanding achievements in socioeconomic, scientific and technological development."

"China has achieved a good position in the system of international economic ties and earned high authority in international affairs. Russia is really happy to see these achievements and wishes China new successes."

Indeed over the past 40 years especially, China achieved impressive economic, industrial, and technological development, surpassing Japan to become the world's second largest economy, heading toward outperforming the US to be the largest economy in the years ahead.

October 2 marked the 70th anniversary of Sino/Russian relations. Current unity between both nations represents a vital counterforce to US hegemonic aims.

Unlike US-dominated NATO, Israel, and their imperial partners, nonbelligerent Russia and China threaten no other countries.

A May 2019 DOD/Pentagon white paper falsely called Russia a strategic US threat, especially united with China.

Leaders of both countries regard each other as key strategic allies. They share a multi-world polarity worldview, ally in major developmental projects, helping their economies grow, including Beijing's One Belt One Road initiative for greater regional integration and development, involving well over $1 trillion in longterm investments.

It's far from it in terrorist-infested parts of the country and in areas illegally occupied by US and Turkish forces.

On October 5, AMN News reported that "foreign jihadist(s) sent a large number of reinforcements to several fronts where the Syrian Arab Army (SAA) is expected to launch an offensive."

Supported by the US and its imperial allies, they're "pouring into northeastern Latakia and Al-Ghaab Plain region…"

On October 5, Erdogan said Turkish forces are ready to launch a military operation on his command. The Anadolu news agency quoted him saying:

"We have completed our preparations and action plan, the necessary instructions were given."

"It is maybe today or tomorrow the time to clear the way for (our) peace efforts (sic) which is set and the process for them was started."

"We will carry out a ground and air operation…Our aim is, I underline it, to shower east of Euphrates with peace (sic).

His aim is all about annexing northern Syrian territory, especially its oil-producing areas.

MZ stressed that areas "not controlled by the Syrian government (remain) hotbeds" of terrorism, essential to eliminate.

"ISIS sleeper cells remain active." Refugees in US-controlled camps continue to be terrorized by US forces and their terrorist foot soldiers.

"Against this background we note the Syrian Government's steps to advance the process of national reconciliation. President Bashar al-Assad signed an executive order on general amnesty that provides for reduced punishment for non-serious crimes committed before September 14, 2019."

Russia's intervention in September 2015 turned the tide of battle on the ground. US refusal to end its illegal involvement in the country fuels endless war with no prospect for resolution any time soon.

MZ: "Alarming elements continue to accumulate in the developments around Venezuela."

"We are concerned over attempts to impart a new quality to the situation, that is, to artificially fit it into a broader context of regional counter-terrorist efforts."

"(T)here are (Trump regime) plans to launch a scenario that is painfully similar to the Syrian scenario," Russia strongly opposing the scheme.

That's what Trump regime economic terrorism in the country is all about.

MZ reported that the (US-created) "Russophobic lobby" is active in Norway. Both countries share a common northern border.

"(T)his is the height of unscrupulousness and a deviation from the professional ethics and norms of journalism."

Media disinformation invented a nonexistent Russian threat, the same thing going on in other regional nations, US dirty hands behind what's going on.

Yet Russian officials continue calling their US counterparts "colleagues" and "partners."

Longstanding US policy aims to transform the Russian Federation into an imperial trophy for Washington, rapprochement a nonstarter, the same policy directed against China, Iran, and other nations the US doesn't control.

That and other hostile acts are what the scourge of imperialism is all about.