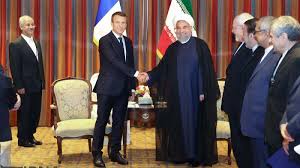 On Tuesday, Politico reported that Trump and Iranian President Rouhani "agreed on a four-point document brokered by Emmanuel Macron in New York last week as a basis for a meeting and relaunching negotiations between the US and Iran" — citing unnamed French officials, adding:

"(D)ays of shuttle diplomacy by Macron on the sidelines of the UN General Assembly" preceded the plan.

Reportedly, Iran agreed to abide by what it's adhered to since its 1979 revolution, Politico failed to explain, quoting from the text it saw:

Tehran agreed it "will never acquire a nuclear weapon (and will) fully comply with its nuclear obligations and commitments and will accept a negotiation on a long-term framework for its nuclear activities."

It will also "refrain from any aggression and will seek genuine peace and respect in the region through negotiations."

The above has always been Islamic Republic policy throughout its 40-year history. Claims otherwise are fabricated, no credible evidence ever supporting them.

The deal requires the US to "lift all the sanctions re-imposed since 2017…Iran will have full ability to export its oil and freely use its revenues."

While the document says nothing about Iran's ballistic program,  Politico quoted an unnamed French official saying "(i)t was clear to all that the negotiation over regional issues would necessarily include their ballistic program" — a nonstarter for Tehran.

Its ruling authorities won't relinquish or compromise on what would self-inflict weakness, its ballistic and cruise missiles maintained and developed solely for self-defense against genuinely feared US and/or Israeli aggression.

Further, Politico should have highlighted that time and again, Trump and Pompeo stressed that (illegally imposed) US sanctions won't be lifted. His regime imposed new ones instead, intended to crush Iran's economy and immiserate its people.

Rouhani and Foreign Minister Zarif stressed that Tehran will continue pulling back from its voluntary JCPOA commitments, as permitted under the deal when other signatories breach it — clearly the case by the US and Europe.

Rouhani refused to meet with Trump on the sidelines of the UN General Assembly because he escalated sanctions war/economic terrorism.

His actions repeatedly belie his hollow words, why he, his regime, and most others in Washington can never be trusted.

The US history of breaching treaties, bilateral agreements, and other deals shows what Iran is up against.

It's part of longstanding US policy, seeking to replace all independent governments it doesn't control with pro-Western puppet regimes.

The US doesn't negotiate. It makes one-sided demands in return for empty promises, proved time and again - notably with Iran, North Korea, and Russia most recently.

Agreements can't work unless all sides fulfill their obligations, clearly not how the US operates, notably with hardliners in change, reality under Trump.

The unnamed French official Politico quoted said Rouhani "agreed on the principles of the document, and he thanked the president because there is the explicit mention of the sanctions, (but) he wanted Trump to say before entering the meeting that he was lifting the sanctions."

According to Politico, Rouhani reportedly said "France had prepared a plan that could be acceptable, because it was basically based on the demand that Iran must not seek nuclear weapons, which we had already said it wasn't, requiring the US to lift all its sanctions," adding:

Politico unfairly criticized Iran, saying its "insistence on the US taking a first step…has consistently been a major hurdle in attempts to broker a resumption of negotiations."

The broadsheet should have stressed that no one should negotiate with a gun at their head, along with explaining that unilaterally imposed US sanctions on any nation flagrantly violate the UN Charter.

The US, especially the Trump regime, bears full responsibility for hostile relations toward Iran, a nonbelligerent nation threatening no one.

Politico also quoted Macron's reinvention of reality, claiming Trump can "change things — if he is convinced — very quickly, and he is not administration-driven, he decides alone and quickly," adding:

"President Rouhani is someone who needs to line up a whole system before negotiating. It's almost the opposite."

As long as US economic terrorism continues, along with falsely accusing Iran for things it had nothing to do with, Rouhani/Trump talks will accomplish nothing but further betrayal by the US.

What Politico should have explained, it ignored.