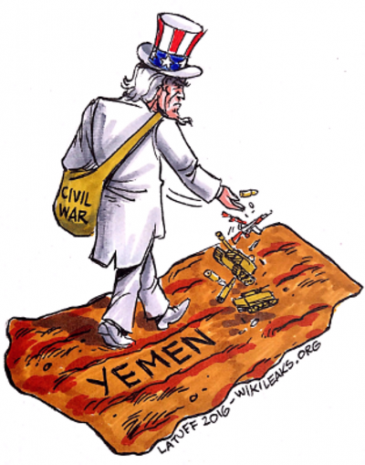 Endless US Aggression in Yemen

Yemen is Washington's war, ongoing for nearly 18 years, the heaviest fighting since March 2015.

The Saudis are used as the main US strike force against the country and its long-suffering people, intermittently throughout the conflict, largely in most recent years.

The US, Britain and France are the kingdom's main suppliers of heavy weapons, munitions, and other military assistance.

Israel is involved in the war. So are US, UK, and French special forces, operating in Yemen on the ground.

US drone war on the country has been ongoing throughout years of conflict, begun by Bush-Cheney.

According to the Bureau of Investigative Journalism, Obama greatly escalated what his predecessor regime began, adding:

US drone wars in all its conflict theaters increased to an unprecedented level under Trump – notably in Yemen, a six-fold increase over 2016.

"(E)ven individuals not considered to pose a 'continuing and imminent threat' can be targeted for death without trial" under a secret US assassination program, the group reported – involving murder by drones, conventional warplanes, and/or special forces operations, as well as by proxy jihadist fighters.

According to Reprieve, "(t)he CIA's own leaked documents concede that the US often does not know who it is killing, and that militant leaders' account for just 2% of drone-related deaths."

The vast majority of victims are defenseless civilians in harm's way — in Yemen, Syria, and other US war theaters.

Resolution of conflicts in all US war theaters are unattainable because bipartisan hardliners in Washington reject restoration of peace and stability in targeted countries.

The September 14 attack on the Saudi's Abqaiq refinery (the world's largest) and Khurais oil field was the latest example of its capabilities, more major strikes vowed if Saudi aggression continues.

Not a shred of credible evidence suggests Iran was involved in striking key Saudi oil facilities this month or other attacks on kingdom territory — nor Persian Gulf, Hormuz Strait and Sea of Oman incidents it was falsely accused of.

Intermittently throughout years of fighting, ceasefires were proposed and breached by the Saudis and its coalition partners.

Washington calls the shots in Yemen. Riyadh most likely wants out of the conflict because of its enormous cost and significant damage to kingdom infrastructure — its oil facilities vulnerable to further Houthi strikes.

On Thursday, Southfront reported the most recent ceasefire violations, Saudi warplanes terror-bombing the port city of Hudaidah and other areas.

On Friday, the Wall Street Journal reported that Riyadh "agree(d) to a partial ceasefire in Yemen, say people familiar with the plans."

The Journal falsely claimed the move followed what it called "the Houthis' surprise declaration of a unilateral cease-fire in Yemen last week" — failing to explain numerous earlier Houthi overtures to halt fighting rejected by the Saudis because of US pressure for conflict to continue.

"Yemen will only accept a comprehensive cessation of aggression and lifting of the siege"— by the US, Riyadh and their imperial partners.

"Houthi officials said Friday that the Saudi-led coalition had recently carried out more than two dozen airstrikes in two of the four provinces where the truce is supposed to curtail attacks," the Journal reported.

Partial ceasefires are especially deceptive — invitations to escalate fighting at the discretion of aggressor forces, unjustifiably justified by invented pretexts, a US specialty.

Is restoration of peace and stability in Yemen more likely now than earlier?

As long as hardliners in Washington want war, ending it is off the table.

If Riyadh halts its involvement, US drone war will surely continue as long as Houthis control most or all Yemeni territory — elements Washington doesn't control.

Both right wings of the US war party want pro-Western puppet rule installed in Yemen.

They're intolerant of sovereign independent Houthi rule, elements not bending to their will, why prospects for conflict resolution are dim.

Turkey and Azerbaijan Want War on Nagorno-Karabakh, Not Resolution