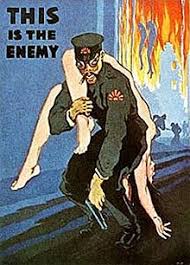 The US Demonizes Invented Enemies

Hegemon USA needs enemies to advance its imperial aims. None exist so they're invented.

The scheme is all about pursuing what the Pentagon's May 2000 Joint Vision 2020 called "full-spectrum dominance."

It refers to unchallenged US control over planet earth, its landmass, waterways, airspace, sub-surface, electromagnetic spectrum, information systems, and outerspace.

It's about "the ability of US forces, operating alone or with allies, to defeat any adversary and control any situation across the range of military operations" — according to the Pentagon.

It's about imperial madness — the US addiction to endless preemptive wars to transform all nations into vassal states, their sovereign rights affirmed under international law subordinated to a higher power in Washington.

It's about risking destruction of planet earth to own it, ignoring the reality that if US wars of aggression don't end, they'll end us.

The US targets all nations it doesn't control for regime change, wanting puppet rule replacing their sovereign independence.

They're ruled by nonbelligerent authorities threatening no one, seeking cooperative relations with other countries, confrontation with none — polar opposite how the US, NATO, Israel, and their imperial allies operate.

Russia is targeted because of its world's largest Eurasian land mass (bordering 14 countries), its vast resources, and super-weapons superior to the West's best capabilities.

China is in the eye of the storm because of its growing economic might, political influence, and military strength able to defend against US aggression if occurs.

Trump's trade war is all about wanting the country marginalized, weakened, contained and isolated — its industrial, economic, and technological development undermined.

It has nothing to do with reducing the US trade deficit — caused by corporate America shifting manufacturing and other operations to low-wage countries.

At the moment, Iran is US public enemy No. 1 for regime change, targeted to eliminate Israel's main regional rival, wanting the country returned to US vassal state status, along with gaining control over its vast oil and gas resources.

Will Trump regime hardliners unthinkably risk boiling over the Middle East more than already, risking possible global conflict, by preemptively attacking nonbelligerent Iran threatening no one — an act of madness if ordered?

Iranian Foreign Minister Zarif, an exemplary diplomat polar opposite how his US counterparts operate, warned of "all-out war" if the US attacks Iran preemptively, adding:

Addressing last Saturday's attack on Saudi oil facilities, he stressed "I know that we didn't do it. I know that the Houthis made a statement that they did it."

Not a shred of credible evidence links Iran to the attack. The Islamic Republic's 40-year nonbelligerent history speaks for itself.

Zarif also emphasized that no talks with the Trump regime will happen unless it returns to the JCPOA and lifts illegally imposed sanctions on Iran, adding:

The unanimously adopted JCPOA by Security Council members, making it binding international law, "is an agreement that we reached with the United States."

"Why should we renegotiate? Why should we start something else, which may again be invalid in a year and a half."

"If they lift the sanctions that they re-imposed illegally…we would consider" talks with the US.

"If the US retracts its words, repents, and returns to the nuclear accord that it has violated, it can then take part in sessions of other signatories to the deal and hold talks with Iran."

"Otherwise, no talks at any level will be held between Iranian and American authorities, neither in New York (at the UN) nor elsewhere."

"Negotiating would mean Washington imposing its demands on Tehran. It would also be a manifestation of the victory of America's maximum pressure campaign."

"That is why Iranian officials — including the president, the foreign minister and others — have unanimously voiced their objection to any talks with the US — be it in a bilateral or a multilateral setting."

Separately, he debunked the phony notion of a Trump regime regional "peaceful coalition" — by a nation waging endless wars of aggression in multiple theaters, reviling peace and stability.

US belligerence is longstanding, especially in the oil-rich Middle East, Central Asia, and North Africa, along with war by other means in the Indo/Pacific, Latin America and elsewhere.