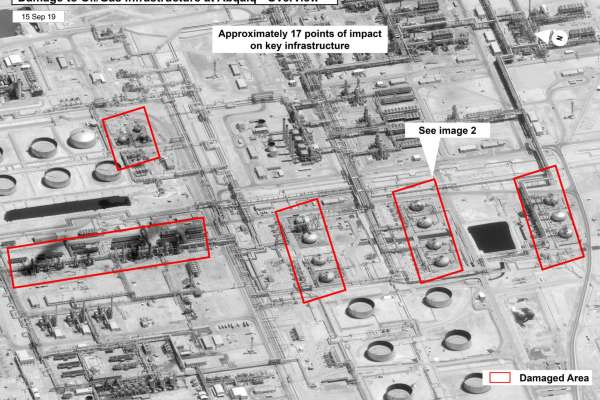 Trump Locked and Loaded Against Iran or Just Bluster?

Take nothing Trump says at face value. Time and again his rhetoric  and actions diverge greatly.

That said, on Sunday he tweeted the following:

"Saudi Arabia oil supply was attacked. There is reason to believe that we know the culprit, are locked and loaded depending on verification, but are waiting to hear from the kingdom as to who they believe was the cause of this attack, and under what terms we would proceed!"

Reality is ignored and key questions aren't asked. Throughout its 40-year history, the Islamic Republic of Iran never attacked another country.

It's the region's leading proponent of peace and stability, seeking cooperative relations with other nations — threatening nonr except in self-defense if preemptively attacked.

Why would nonbelligerent Iran attack another country now? Why would it strike another nation's oil facilities — risking war, including retaliation against its own production and refining capabilities?

Satellite images indicated considerable damage to Saudi energy facilities struck, halting over half the kingdom's oil and gas operations until it's repaired.

Houthis launched the attack either from Yemeni or Saudi territory its fighters captured near the border between both countries.

Pompeo falsely blamed Iran for what happened, tweeting there was "no evidence the attacks came from Yemen (sic)."

On Sunday, the Wall Street Journal cited unnamed Trump regime officials, claiming without evidence that "the fiery blasts were the result of cruise-missile strikes launched from Iraq or Iran…"

Unacceptable Trump regime accusations "seem more like a plot being hatched by secret and intelligence organizations aimed at tarnishing a country's image and setting the stage for future actions."

On Sunday, Iranian President Rouhani said "(t)oday what is taking place in this region and has concerned many countries of the world is the result of erroneous plans and conspiracies of the United States," adding:

"We have declared time and again that regional issues must be resolved by regional countries and through dialogue."

"If we want the establishment of real security in this region, a full stop must be put to acts of aggression by the US and provocative interventions by the (Israeli) Zionist regime. Otherwise we will witness the continuation of insecurity."

So far, the extent of damage to Saudi oil and gas facilities is unclear. The WSJ said the following:

Treasury Secretary said he's willing to meet with Rouhani in late September on the sidelines of the annual UN General Assembly session with "no preconditions."

Weeks earlier, DJT said "I'll meet (with Rouhani) anytime they want," adding: It would be "good for the country, good for them, good for us, and good for the world." He made similar remarks a number of other times.

On Sunday, he tweeted the following: "The Fake News is saying that I am willing to meet with Iran, 'No Conditions.' That is an incorrect statement (as usual!)" — contradicting his earlier statements.

Note: Rouhani and other Iranian officials reject talks with Trump unless his regime returns to the JCPOA it unlawfully abandoned and lifts illegally imposed sanctions.

In the wake of Houthi damage to key Saudi oil fields, falsely blamed on Iran, a Rouhani/Trump meeting under any conditions is even less likely.

"Everybody should know that all American bases and their aircraft carriers in a distance of up to 2,000km around Iran are within the range of our missiles."

Saturday Houthi attacks on Saudi oil facilities were on a larger scale than the kingdom ever before experienced.

Riyadh has two options: Cease terror-bombing Yemen and lift the blockade on the country or face repeated Houthi strikes on its strategic targets, notably its oil and gas facilities.

If the Trump regime attacks Iran, all bets are off.

What's unlikely is possible because White House and congressional Iranophobes want the country transformed into a US vassal state.