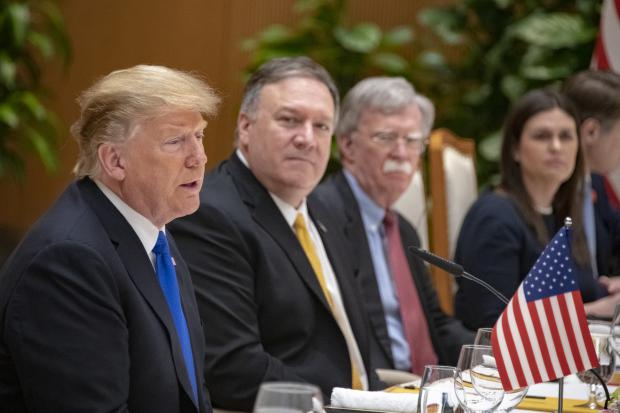 Media reports suggest that Trump may add national security adviser (NSA) responsibility to Pompeo's portfolio. More on this below.

Militantly hostile toward all nations the US doesn't control, he matches or exceeds the worst of his predecessors.

He's notably hellbent for toppling Iran's legitimate government, perhaps by whatever it takes to achieve the objective.

At the Security Council last month, he lied, accusing Iran of "foment(ing) terror and unrest in Iraq, Lebanon, Syria, and Yemen with devastating humanitarian consequences (sic)" — ignoring the US war OF terror worldwide.

He lied claiming Iran "continues to threaten further expansions of its nuclear program in defiance of its international commitments."

He lied about IRGC actions against vessels it interdicted in the Persian Gulf — because of their provocative maritime law breaches, he ignored.

Most often when interviewed by US and other Western media, he goes out of his way to spread disinformation, Big Lies and fake news about Iran.

He operates the same way against Iran, Venezuela, and other sovereign independent countries.

On Tuesday, he falsely accused Iran of not cooperating with the IAEA, saying it "raises questions about possible undeclared nuclear material or activities (sic). This fits into Iran's 40-year pattern of lies (sic)," adding:

"We will deny (Tehran) all paths to a nuclear weapon." Virtually everyone in Washington, other NATO capitals, and Tel Aviv, paying attention, knows it doesn't seek nukes, including the US intelligence community.

Ahead of this month's annual UN General Assembly session, Pompeo has been pressuring and bullying other nations to be tough on Iran — a nonbelligerent state, the region's leading peace and stability proponent.

He laughably said Trump is willing to meet with Iranian President Rouhani on the sidelines of the General Assembly session "with no preconditions."

DJT will address the assembly on September 24, Rouhani the next day. The US always has pre-conditions in dealings with other nations, demanding they bend to its will, offering nothing in return but vassal status.

If Trump makes Pompeo his geopolitical tsar, he'll be one of only two US officials to be both top "diplomat" and national security advisor, Kissinger the other from 1973 to 1975.

As of Thursday, Trump hasn't chosen Bolton's replacement, saying he has five candidates for the post he considers "very highly qualified."

The American Conservative slammed the idea of Pompeo holding dual portfolios, saying, "the fact that (it may be under consideration) is a very bad sign of what is to come," adding:

He's "arguably the worst secretary of state in modern US history. He is certainly one of the most dishonest and partisan to hold the position."

"He would be an equally poor national security advisor, and attempting to fill both roles would practically guarantee failure in each one."

"Just as (he's) done practically nothing to repair the damage that his predecessor did to the State Department, he is not likely to rebuild the policy process that Bolton destroyed."

He's Trump's "chief yes-man," why they get along well. Based on his record, he's unlikely to tell DJT what he doesn't want to hear.

Like many others in Washington, he likely has greater ambitions, perhaps a White House run to succeed Trump.

He's supremely undiplomatic, differing from Bolton in style, not extremist ideology. With the other guy gone and him still around close to Trump, the ghost of the defrocked NSA haunts the executive branch.

According to the Washington Examiner, "sources close to the (White House) say…Trump will make an unusual pick" — asking Pompeo to succeed Bolton, adding:

"Pompeo openly holds presidential ambitions and has considered a Kansas Senate campaign next year, though he told the Washington Examiner last month he won't run."

Whoever succeeds Bolton as NSA, Pompeo will be closest to Trump on geopolitical issues.

The Washington Examiner said they often lunch together at the White House. Perhaps DJT will ask him to hold dual geopolitical portfolios.

Asked on Thursday if he'll name Pompeo national security advisor, Trump said: "No, I wouldn't" give (him) a second title — admitting they discussed the idea.

He also claimed his views on Venezuela and Cuba are "far stronger than" Bolton's, adding "he was holding me back (sic)."

On September 10, Trump's envoy for regime change in Venezuela Elliott Abrams commented on whether the US will invade Venezuela, saying:

"(O)n the military question, the president has said all options are on the table. They always are," adding:

"Our policy now is economic, financial, diplomatic, political pressure…That's what we are doing" — ignoring the illegality of what's going on, undeclared war on the country by other means.