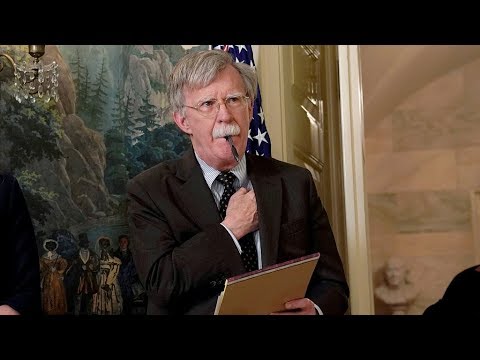 The Myth of Bolton's Departure Changing Anything

Still around, Pompeo is a virtual Bolton clone, recklessly dangerous, never to be trusted, hostile to virtually everything just societies hold dear — especially peace, equity and justice, notions he abhors.

Countless others in Washington are likeminded or close behind, including congressional members from both right wings of the US war party — overwhelmingly for a permanent state of war on humanity at home and abroad.

The NYT falsely said Trump is open to easing sanctions on Iran — despite no evidence suggesting it other than saying: "We'll see what happens," a meaningless phrase without substance he repeats time and again.

The Times: Trump "appeared to take a step back from his… "maximum pressure" campaign against Iran on Wednesday, leaving open the possibility of easing economic sanctions before starting new nuclear negotiations with Tehran."

President Rouhani ruled out talks with Trump unless his regime returns to the JCPOA and lifts unlawfully imposed sanctions on Iran.

"We are ready to talk and consult with others on how to best implement this deal. We are talking about Europe coming to comply with its own obligations under the deal."

"We already talked to the US extensively for over two years and we've reached a conclusion…that was 159-page(s) long."

"It is a serious agreement, (including) almost all aspects of the nuclear issues as well as the aspect of the US sanctions against Iran."

"So if they want to come back into the room there is a ticket that they need to purchase, and that ticket is to observe the agreement" and lift illegally imposed sanctions.

Iran's legitimate missile program, solely for self-defense, is "not part of the deal."

The Times: Trump "warned Iran against restarting production of the material necessary to make a nuclear bomb" — it doesn't seek and never did.

The self-styled newspaper of record never explained it, reporting nuclear mythology about Iran while ignoring nuclear armed and dangerous Israel.

The Times: "Signs of Mr. Trump's softening against Iran have surfaced over the summer."

The only "signs" that matter are absent, rhetoric meaningless. US hostility toward Iran is longstanding because of its sovereign independence, opposition to US wars of aggression, and support for Palestinian rights.

Economic strangulation is official US policy against nations targeted for regime change.

Trump regime policy toward Iran is based on Pompeo's 12 unacceptable demands no responsible leadership would accept.

They include ceasing all uranium enrichment and pledging no plutonium processing ever. The JCPOA permits enough of the former for energy use.

Tehran must allow "unqualified access to all sites throughout the country," including off-limits military ones excluded under the JCPOA.

Its government must cease its regional military activities – entirely involved in combating US supported terrorists in Syria on request of its government.

US citizens held by Iran must be released, no matter what offenses they're accused of committing.

The Islamic Republic must cease being a threat to Israel. It never was and isn't now, the Jewish state a major threat to regional and global security.

It "must end its…ballistic missiles…launching or development of nuclear-capable missile systems" – the latter something it doesn't have or want, the former it has every right to develop.

It "must…permit the disarming, demobilization, and reintegration of Shia militias" in Iraq. Tehran supports what Washington rejects – Iraqi sovereignty.

Iran must "cease harboring senior al-Qaida leaders" – a US specialty, the Islamic Republic strongly opposed to the scourge they represent.

"Iran…must end the IRGC Quds Force's support for terrorists and militant partners around the world" — what Iran abhors and Washington supports.

In dealings with all nations it doesn't control, Republicans and Dems demand they subordinate their sovereign rights to US interests.

Unlawful sanctions won't be lifted unless targeted nations bend to  unacceptable US demands.

The Times falsely accused Iran of taking "steps that violate the terms of the" JCPOA — failing to explain its actions are permitted by its provisions when other signatories breached their obligations, notably the US and Europe.

Trump is a deal-breaker, not a maker. Criticizing Iran's legitimate right to increase uranium enrichment, he unacceptably called it "very dangerous," a veiled threat.

It's more evidence of his regime's anti-Iran toughness. The notion of softening his policy toward the  country is pure fantasy.