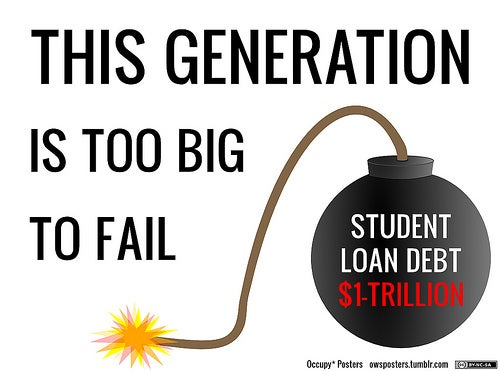 Entrapping students into longterm or permanent debt bondage is part of a government/corporate scheme to enrich private lenders.

Because of the high cost of higher education, millions of students need large loans to pay tuition, fees, and other expenses.

Some face burdens up to $100,000 or higher. If unpaid after 30 years, it can be multiples this amount because of debt service costs. If default or declare bankruptcy, it's unforgiven. Bondage is permanent.

Exceptions are only granted in extreme hardship cases likely to continue for the term of indebtedness, along with having shown good faith efforts to repay.

In the vast majority of cases, loans must be repaid as long as they're outstanding. Federal laws mandate it - perhaps to get worse. More on this below.

The longer unpaid student loan balances remain outstanding, the more profitable it is for lenders, including from defaults.

Wages can be garnished. So can portions of Social Security and other retirement benefits. A conspiratorial alliance of lenders, guarantors, servicers, and collection companies derive income from debt service and inflated collection fees.

The total for FinAid.org is slightly lower at under $1.7 trillion, the amount increasing exponentially, expected to reach $2 trillion by 2022 - permanent debt bondage for millions of Americans.

About 45 million students and graduates have outstanding student loan indebtedness.

It's hard to repay because of protracted main street Depression conditions. Real unemployment exceeds 20% based on how the Labor Department calculated it in the 1980s - before numbers were manipulated lower to create the illusion greater jobs creation, low unemployment, and prosperity than exist.

The 3.7% number is pure deception. Most jobs available are rotten low-pay/poor-or-no-benefit part-time or temp ones - millions of industrial and high-paying better jobs offshored to low-wage countries.

For individuals entrapped in high student loan debt, serving and repaying it is especially burdensome, forcing millions into default but not free from their obligation.

According to theFreeThoughtProject.com, citing government data, "11.5% of student loans are 90 days or more delinquent or are in default" - a nearly $200 billion unrepayed debt obligation, increasing because of mounting debt service costs.

If enacted into law, the change could affect around 40 million individuals. Federal student loans can now be repaid 14 different ways.

Alexander proposed cutting it to two. By one route, monthly debt service would be capped at 10% of discretionary income - the residual amount after taxes and what's needed for necessities, including food, shelter, clothing, and medical expenses.

A second option is repaying student loan debt over a 10-year period. Either way, employers would make automatic payroll deductions. A sub-option would be for borrowers to set up their own automatic debt service arrangement with their lenders directly.

The  National Consumer Law Center slammed Alexander's proposal, saying "(f)or borrowers with tight budgets that need to be navigated on a monthly basis, forced automatic payroll withholding may mean diverting money away from rent, heat or food in order to pay their student loans."

The problem with them is once entrapped, escape is nearly impossible. Except for court ruled hardship cases, as explained above, student loan indebtedness remains for life as long as it's outstanding.

It's part of a colossal scheme to transfer the nation's wealth from ordinary Americans to the nation's super-rich. It's been going on for decades, accelerated under Obama, more so under Trump.

For most students in need of financial help to pay tuition, fees and other expenses, loans are relatively easy to get, tough to service, almost never forgiven.

A vicious circle entraps students, graduates and workers, even retirees if entrapped with unrepayed debt.

Student loans take years or decades to repay. Much can happen over an extended period, including unemployment for short or longer periods.

At best, most all debt entrapped individuals can only delay repayment, not get out from under it.

The longer debt remains unrepayed, the greater the service costs, why repayment most often takes many years.

Millions of Americans are entrapped in longterm or permanent debt bondage. America's ownership society favors capital at the expense of popular rights and well-being - ordinary people exploited to benefit the privileged few.