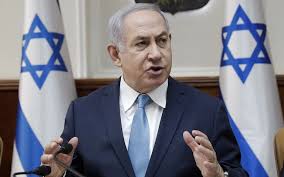 Nuclear armed and dangerous Israel is a global menace, an indisputable fact.

It maintains unlawful stockpiles of chemical, biological, and other terror weapons as well.

The world community and establishment media remain silent about its existential threat to regional peace and stability — its global threat in cahoots with US-led NATO wars of aggression.

Iran's legitimate nuclear program with no military component is the world's most intensively monitored.

Rolling back its voluntary commitments under the deal is permitted by Articles 26 and 36 because of non-compliance by other JCPOA signatories — to be reversed if Britain, France, Germany, and the EU fulfill obligations they breached so far.

Time and again for years, Netanyahu and other Israeli hardliners cried wolf about Iran's legitimate nuclear program, blasting the Big Lie about a nonexistent Iranian threat.

Ahead of September 17 Israeli elections, his political future at stake, Netanyahu once again used fear-mongering tactics as a vote-getting scheme.

Numerous times before, he claimed an Iranian nuclear threat that doesn't exist, and never did throughout Islamic Republic history — ignoring real threats posed by Israel's WMDs and hegemonic aims.

He falsely claimed the JCPOA "deal paved Iran's path to a nuclear arsenal."

He lied claiming sanctions lifted by the JCPOA's adoption "fueled Iran's campaign of carnage and conquest throughout the Middle East" that doesn't exist — how the US, NATO and Israel operate, not Tehran.

In May 2018, timed with Trump's JCPOA pullout, he falsely claimed Israel has thousands of incriminating documents, charts, presentations, photos and videos, showing Tehran lied for years to the international community.

Citing no credible evidence because none exists, he lied claiming Iran has a secret nuclear weapons program called Project Amad – to "design, produce and test 5 warheads, each of 10 kilotons TNT yield for integration on a missile."

No evidence affirmed any of his clearly fabricated accusations about Iran earlier or now.

On Monday, he was at it again, falsely claiming Israel discovered a (nonexistent) secret Iranian nuke development site it destroyed.

"They just wiped it out" after Israeli intelligence discovered it, he roared — one of his many Big Lies, followed by another, saying:

"The possessor of REAL nukes cries wolf—on an ALLEGED 'demolished' site in Iran.

He & (the Trump regime's) #B_Team just want a war, no matter innocent blood & another $7 TRILLION.

Remember his 'GUARANTEE' of 'positive reverberations' in '02?

This time, he assuredly won't be on the sidelines watching."

"If you take out Saddam, Saddam's regime, I guarantee you that it will have enormous positive reverberations on the region."

"And I think that people sitting right next door in Iran, young people, and many others, will say the time of such regimes, of such despots is gone."

The Big Lie promoted by Bush/Cheney was later exposed too late. US aggression on Iraq destroyed the cradle of civilization, caused millions of casualties, immiserated its people, and created chaotic conditions in the country and region — polar opposite what Netanyahu claimed.

He's a longstanding serial liar. In 1992, MK Netanyahu said Iran was "3 to 5 years" from having a nuclear weapon.

In 1995, US and Israeli officials claimed Iran would have the bomb by around 2000.

In 1998, Donald Rumsfeld (later Bush/Cheney's war secretary) falsely told Congress that Iran would have ICBMs able to strike the US by 2003. It has none today.

Since its 1979 revolution, ending a generation of US-installed fascist dictatorship, Big Lies about a nonexistent Iranian threat were blasted by US and Israeli officials, repeated by establishment media — about the region's leading proponent of peace, stability, and cooperative relations with other states.

Last year, Iran's Foreign Ministry spokesman Bahram Qassemi called Netanyahu "an infamous liar (head of a) child-killing Zionist regime…who has had nothing to offer except lies and deceits."

Zarif earlier called him "(t)he boy who can't stop crying wolf," adding: "You can only fool some of the people so many times."