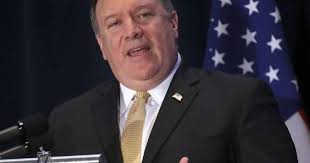 True enough. All politicians lie, some more egregiously than others — Trump the nation's liar-in-chief, exceeding the worst of his predecessors. His dissembling is so extreme he may no longer be able to distinguish between facts and fiction.

He falsely claimed "terror strike(s)" on the US came "from Afghanistan…on 9/11" — the mother of all US state-sponsored false flags, CIA (and maybe Mossad) dirty hands all over them, clearly no Afghan involvement.

Pompeo and Bolton undermined US/Taliban No-Peace/Peace Talks — much like they sabotaged improved US relations with North Korea and manipulated Trump against Iran.

The US needs enemies to justify its unjustifiable imperial agenda. None exists so they're invented — all US preemptive wars and other hostile actions waged against nonbelligerent states threatening no one, how it's been throughout the post-WW II era.

The US came to Afghanistan to stay, explained in previous articles, conflict resolution out of the question.

If peace and stability was restored to US war theaters, its unjustifiable justification for staying would be lost.

So they boil endlessly, giving US forces a pretext for endless wars and occupation, the rule of law be damned.

Manipulated by Pompeo and Bolton, geopolitical know-nothing Trump suspended/maybe cancelled no-peace/peace talks with the Taliban, a statement from the group on Sunday saying:

"Now that US President Trump has announced the suspension of negotiations...this would not harm anyone else but the Americans themselves."

US policymakers seek unchallenged global dominance, the human toll of no consequence anywhere — ordinary people to be exploited, not served, the longstanding American way.

A Kabul attack last week, killing civilians and a US soldier, had nothing to do with Trump halting talks with the Taliban.

It had everything to do with Pompeo and Bolton manipulating him, along with undermining any possibility of US forces leaving the country, letting Afghans alone run it.

He blamed Taliban fighters for US aggression the way Assad is falsely accused in Syria, Houthis  the same way in Yemen, and Iran wrongfully blamed for US, NATO, Israeli high crimes throughout the region, along with Hamas and Lebanon's Hezbollah, falsely designated terrorist groups.

On Iran, Pompeo repeated the long ago debunked Big Lie about it possibly seeking nukes — including by annual US intelligence community assessments of global threats, an Iranian "bomb" not one of them.

Nor does an Iranian "terror threat" exist — a US, NATO, Israeli specialty, never how the Islamic Republic operates.

It's a nonbelligerent nation in a part of the world boiling from endless US-led wars of aggression and Israeli state terror against defenseless Palestinians and neighboring countries.