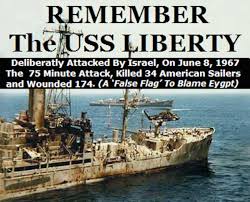 Throughout Israel's history, its ruling authorities have been responsible for virtually every form of indignity, degradation, barbarity, and other high crimes of war and against humanity imaginable.

Palestinians suffered most from the theft of 78% of their historic homeland in 1948, the remainder in June 1967 — living under brutalizing military occupation since that time, their fundamental rights lost under apartheid ruthlessness.

Supporters of peace, equity, and justice accused Israel of daily high crimes against the Palestinian people, including cold-blooded murder and other forms of state terror.

Israel gets away with mass murder and much more because the world community fails to hold it accountable, the US most of all — both countries partnering in each other's high crimes.

Its website claims it's committed "to helping our fellow veterans, service members and their families."

No mention was made of blackballed USS Liberty vets — "the most decorated (ones) since World War II, (because of their) extraordinary record of heroism, Weir explained, adding:

"Legion personnel have repeatedly treated Liberty veterans, their families, and their friends with arrogance, disrespect, and even disdain that many feel demeans these American servicemen, their ship, their service to their country, and the memory of their 34 fellow crewmembers who never returned."

The incident took 34 US lives, another 171 wounded, the vessel severely damaged, lucky to stay afloat.

It was deployed to monitor belligerents' communications in response to Israeli aggression on Egypt, Jordan, Syria and Iraq – not the other way around.

Israeli leaders and generals explained long after the fact that the Jewish state was unthreatened at the time.

In 1972, IDF chief General Haim Barlev said: "We were not threatened with genocide on the eve of the six-day war, and we had never thought of such a possibility."

In 1978, IDF air force General Mordechai Hod said: "Sixteen years of planning had gone into those initial eighty minutes. We lived with the plan. We slept on the plan. We ate the plan.  Constantly we perfected it."

Knowing it faced no regional threats, Israel preemptively and aggressively attacked four nonbelligerent Arab states and its key US ally without just cause.

It was no accidental IDF attack on the USS Liberty. Israel knew the ship's identity, its US flag clearly visible. Good weather conditions made it easy to spot.

Israeli warplanes circled overhead before attacking, at times low enough for US sailors to wave to its pilots.

They waved back before opening fire with rockets, machine guns, and napalm terror-bombs against the lightly armed vessel.

Parts of the deck were set ablaze. Torpedoes launched from IDF boats caused a 40-foot-wide hole in its hull, flooding lower compartments, causing the ship to list 10 degrees, a defenseless smoking hulk, lucky to avoid sinking.

The ship's radio frequencies were jammed to prevent a distress call for help. When finally able to communicate, it was too late. The damage was done, the human toll testimony to Israeli viciousness.

Israel willfully attacked the US with impunity to this day, the incident officially buried down what Orwell called the "Memory Hole."

USS Liberty survivors are treated like nonperson enemies of state by the American Legion and US war department. They were supposed to die, not live, to silence them.

Former Joint Chiefs of Staff chairman Thomas Moorer minced no words, saying: "Those men were…betrayed and left to die by our own government."

US navy signalman on the vessel Joe Meadors posted the following on the USS Liberty Veterans' Association blog on what its survivors were told, saying:

"You will not discuss the attack with anyone. Once the Court of Inquiry findings are released you will not contradict them."

"This order will remain in effect after you are discharged from the Navy. If you violate this order you will be prosecuted and will spend a considerable amount of time in a Federal Prison."

"This order was repeated every day at quarters while we were in drydock in Malta."

"If anyone tells of witnessing the deliberate machine gunning of our life rafts in the water, he runs the risk of doing time in a Federal prison."

"If anyone tells of witnessing the use of unmarked aircraft or of the jamming of our radios on both US Navy tactical and international maritime distress frequencies, he runs the risk of doing time in a Federal prison."

"We cannot talk about this with anyone. If we do, we risk Federal prison."

"But we defy the Federal Government and speak about the attack anywhere we can."

"But now we cannot talk about it at The American Legion National Convention."

The organization "has a long record of trying to stifle USS Liberty survivors in our effort to tell the story of what happened on a US Navy ship."

Alison Weir's If Americans Knew and others on the right side of history won't let this story die.