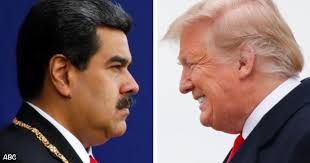 Article 349 of Venezuela's Constitution states no other power can "in any way impede (the ANC's) decisions…" – not the president, National Assembly legislators or Supreme Court justices.

He long ago should have been arrested and held fully accountable for complicity with the Trump regime's coup plot, illegally self-declaring himself interim president, breaching Venezuelan law, and inciting rebellion against its legitimate leader and government.

Investigated for the above high crimes since last spring, no action was taken against him — though his waning support shows he's increasingly delegitimizing himself.

Constitutionally authorized, the ANC was established by national referendum to revise or rewrite the nation's Constitution.

For the US, talking with Cabello is all about trying to split Bolivarian resolve, a divide and conquer strategy, aiming to enlist his support for regime change in return for special favors offered.

Trump confirmed that talks have been going on for some time, Maduro saying they'll continue, adding:

If Trump "wants to talk, we are always ready. (I)f (he) attacks (by imposing an illegal blockade or other belligerent act), we'll answer back."

Clearly he knows the US doesn't negotiate. It demands. It can never be trusted, time and again breaching treaties and other agreements, along with saying one thing and doing another.

"We have denounced the US government to the Security Council and the UN General Secretary for the criminal blockade, and threats of establishing a naval blockade and use of force against the people of Venezuela."

On Wednesday, Sergey Lavrov met with Venezuelan Vice President Delcy Rodriguez in Moscow. Talks focused on "trade and bilateral cooperation  regarding scientific research, technology, and culture" — along with reaffirmation of Moscow's support for the Bolivarian Republic's sovereign rights and resolution of Trump's war on the country by other means diplomatically.

According to the Axios news site, Trump is "obsess(ed)" with imposing a naval blockade on Venezuela to block all exports and imports of goods, including food and other essentials to life.

It's no simple task with its 1,700-mile-long coastline. Citing current and former Trump regime officials allegedly aware of his views, Axios said he "rais(ed) the idea of a naval blockade periodically for at least a year and a half, and as recently as several weeks ago…"

"I won't speak to details of what we're planning and what we're doing, but we remain ready to implement policy decisions and we remain on the balls of our feet" if acting against Venezuela is ordered, adding:

"The United States navy is the most powerful navy in the world. If a policy decision is made to deploy the navy, I'm convinced that we'll be able to do what needs to be done."

Falsely calling Maduro "illegitimate," he's gung-ho for aggression against the Bolivarian Republic if called on to block its coastline or conduct other hostile naval operations against the country.

He resembles former US Generals Curtis LeMay and Lyman Lemnitzer. In 1961, they urged a surprise nuclear attack on Soviet Russia when the US had a huge military advantage.

The topic was raised during a National Security Council meeting when Jack Kennedy was president.

In disgust, he walked out, telling Secretary of State Dean Rusk: "And we call ourselves the human race."

Defense Secretary Robert McNamara rejected the idea of nuking Soviet Russia. Other extremists then and later urged the same lunatic scheme, Washington infested with them today.

Warrior Trump is no Jack Kennedy, far from it. Nothing he says or does surprises. Manipulated by Pompeo, Bolton, Abrams and their henchmen, anything against Venezuela, Iran, and other nations on the US target list for regime change is possible.

Militarism and warmaking is a US national addiction. The business of America is endless wars of aggression at the expense of vital homeland needs gone begging.

Ordinary Americans are exploited so rich ones and corporate interests can amass greater wealth and power.

In Venezuela, Iran, Syria, North Korea, Yemen, and other countries the US seeks hegemony over, the struggle for their soul continues.

The only alternative is resisting its tyranny or be devoured by it.

There's no in between, nor is an equitable deal with the devil possible.

Giving the US a taste of its own toxic medicine is the only effective strategy against its imperial rage.