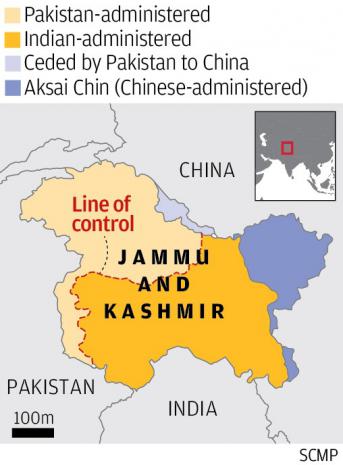 The territory includes Indian-administered Jammu and Kashmir, Azad Kashmir and Gilgit-Baltistan areas run by Pakistan, and about 15% of the territory controlled by China.

Conflict between both countries began after the 1947 partition of India — following its independence from Britain. It sparked Indo/Pakistani wars in 1947, 1965, 1971, 1999, and frequent cross-border skirmishes.

Both countries have nuclear arsenals, making war between them much more potentially dangerous — especially over the issue of Kashmir that should have been resolved by compromise and letting Kashmiris decide their future.

Both nations claim sovereignty over Jammu and Kashmir. India controls about 55% of the territory, Pakistan most of the rest.

Following Indo/Pakistani conflict in 1947, a UN-brokered ceasefire established a Line of Control between areas administered by both countries.

For over 70 years, irreconcilable differences between them over Kashmir left the festering conflict unresolved — testimony to failed diplomacy by both countries.

The latest incident involved India's revocation of Article 370 of Kashmir's Constitution that gives special status to Jammu and Kashmir, risking conflict between both countries over this issue.

The late Pakistani scholar, political scientist, anti-war/human rights activist Eqbal Ahmad believed that a "Kashmiri solution for Kashmir" is the only way to resolve the issue, stressing:

"While Pakistan and India engage in shadow boxing, Kashmir is trampled underfoot. The dispute over Kashmir can only be resolved by understanding Kashmiri aspirations."

It's their land. They should be empowered to administer it, their situation similar to Israeli-occupied Palestine, a foreign power controlling the lives of its people.

Ahmad believed their solution is to "out-legitimize" Israel as an occupying power. Let the Jewish state delegitimize itself in the face of united Palestinian nonviolent resistance.

It was Gandhi's approach to achieving India's independence. When public support for UK colonization ended, occupation collapsed and Britain pulled out.

For Palestine, Ahmad advised the following, saying: "We're not going to destroy Israel. That is not our intent. We just want to go home."

"Reverse the symbols of the Exodus. See if the Israelis are in a mood to sink some ships. They probably will. Some of us will die. Let us die."

He believed over time Israel would be unable to contain the power of internal pressures.

Ahmad viewed their struggle through the spectrum of decolonized India, Cuba's independence, Vietnam's triumph over US forces, and other successful anti-colonial movements in Asia, Latin America and Africa.

Palestinians disregarded his advice. Disunity and complicity by the PA makes it much harder to end the repressive yoke of Israeli militarized occupation.

The official position of India and Pakistan is to deny Kashmiris self-determination, a universally recognized right both countries reject for their people.

The right of self-determination for Kashmiris was affirmed by the UN Security Council in 1948. Pakistan's earlier ruling authorities called for a plebiscite for Kashmiris to chose between India and Pakistan as an occupying power.

If given a choice, they're likely to want either independence from both countries or maximum autonomy, running their own affairs free from control by a foreign power.

Ahmad argued for an Indo/Pakistani agreement, giving Kashmiris the right to decide their own future.

He believed an agreement is possible that "does not hurt the interests of either country."

The area is predominantly Muslim. Ahmad still believed that if a plebiscite was held before the second Indo/Pakistani war in 1965, most Kashmiris would have voted to join India.

Today, Muslim, Hindu, and Buddhist Kashmiris likely want independence from both countries — their right under international law not granted them by India or Pakistan.

Before his 1999 death, Ahmad said Indian-controlled Kashmir is most disputed.

He argued for an Indo/Pakistani agreement that leaves Pakistani-controlled Kashmir under its control, Jammu and Ladakh administered by India, the Kashmir Valley (the Vale of Kashmir) given independence.

"Unite the territory, keep sovereignties divided, which in our time is fairly possible," he believed, adding:

"Remove the lines of control. Remove border patrols. Make trade free among these three. Make India, Pakistan and the independent Kashmiri government jointly responsible for the defense of this mountain area."

"Allow each community maximum autonomy with divided sovereignty. Kashmir would then serve as the starting point of normalizing relations between India and Pakistan."

Disputed Kashmir created adversarial relations between both countries. Resolving the issue could remove the threat of another conflict between two nuclear powers.

It would also curb the spread of Islamic and Hindu militancy, Ahmad believed.