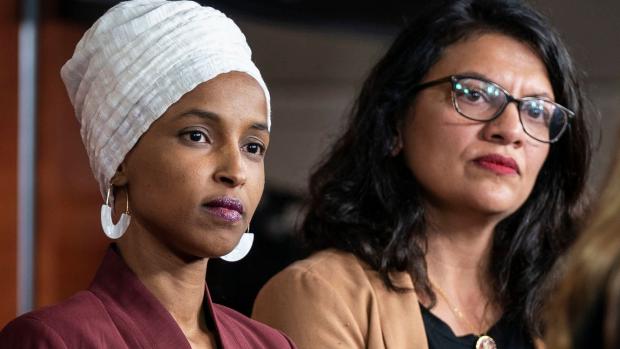 He's "a disgrace" and an embarrassment to the office he holds, not them, as he falsely claimed.

Every rule of law supporter "hate(s)" Israel's apartheid rule, its state-sponsored terror, its theft of Palestinian land and dispossession of its lawful residents, its barbaric practices, its partnership with US wars of aggression, along with its support for ISIS and other regional jihadists.

Following her denial of entry into Israel, Omar said the following:

"It is an affront that Israeli Prime Minister Netanyahu, under pressure from President Trump, would deny entry to representatives of the US government," adding:

"Trump's Muslim ban is what Israel is implementing, this time against two duly elected Members of Congress."

"Denying entry into Israel not only limits our ability to learn from Israelis, but also to enter the Palestinian territories."

"Sadly, this is not a surprise given the public positions of Prime Minister Netanyahu, who has consistently resisted peace efforts, restricted the freedom of movement of Palestinians, limited public knowledge of the brutal realities of the occupation and aligned himself with Islamophobes like Donald Trump."

"As a member of the House Committee on Foreign Affairs, it is my job to conduct oversight of foreign aid from the United States of America and to legislate on human rights practices around the world."

"The irony of the 'only democracy' in the Middle East making such a decision is that it is both an insult to democratic values and a chilling response to a visit by government officials from an allied nation."

Tlaib called Netanyahu's ban "a sign of weakness," adding "the truth of what is happening to Palestinians is frightening."

Netanyahu falsely accused both congresswomen of "intend(ing) to harm Israel."

They're critics of Israeli repression and support BDS activism like countless others worldwide, including many Jews.

On Thursday, Israeli reporter Barak Ravid tweeted: "I want to tell you a secret: A month ago when Netanyahu decided to allow Omar and Tlaib into the country they alreadty (sic) supported BDS and he knew it back then."

"There is only one reason for Netanyahu's backtracking today — the pressure from Donald Trump."

Last month, Israeli envoy to Washington Ron Dermer said "out of respect for the US Congress and the great alliance between Israel and America, we would not deny entry to any member of Congress into Israel."

He clearly referred to Omar and Tlaib, well-known Israeli critics and BDS supporters.

In mid-July, Omar introduced a House Res. 496: "Affirming that all Americans have the right to participate in boycotts in pursuit of civil and human rights at home and abroad, as protected by the First Amendment to the Constitution."

It "opposes unconstitutional legislative efforts to limit the use of boycotts to further civil rights at home and abroad."

It "urges Congress, States, and civil rights leaders from all communities to endeavor to preserve the freedom of advocacy for all by opposing anti-boycott resolutions and legislation."

The Global BDS Movement applauded the resolution, saying: "It affirms the right of all activists and people of conscience to advocate for human rights through boycotts against systems of oppression."

"The defense of those rights is even more vital in light of the rise of far-right racism and white supremacy, including Israel's decades-old apartheid regime."

Separately, the BDS Movement "condemn(ed) (the) McCarthyite (Netanyahu regime's) decision to (bar) Tlaib and Omar from visiting the Occupied Palestinian Territory over their support for Palestinian freedom."

"Never before have US members of Congress been barred from entering Israel."

"The fact that the US president would urge the Israeli prime minister to bar members of Congress really does a disservice to this bilateral relationship and is yet another attempt by (Trump) to politicize this relationship."

An AIPAC statement said "every member of Congress should be able to visit" the Jewish state.

Jewish Voice for Peace called barring entry into Israel of Omar and Tlaib part of the Jewish state's "racist apartheid policies in practice."

The American Jewish Committee said "Israel did not choose wisely by reversing its original decision" to let both US lawmakers enter the country.

Even neocon hardline US Senator Marco Rubio called denying them entry "a mistake."

Despite strong support for Israel by nearly all its congressional members, Dems opposed the move for political reasons ahead of 2020 elections.

On Friday, Israel's interior minister Aryeh Deri reversed the ban on Tlaib's entry into Occupied Palestine, granting her permission to enter the Territory.

She requested it by letter "to visit (her) relatives, and specifically (her) grandmother, who is in her 90s and lives in Beit Ur al-Fouqa."