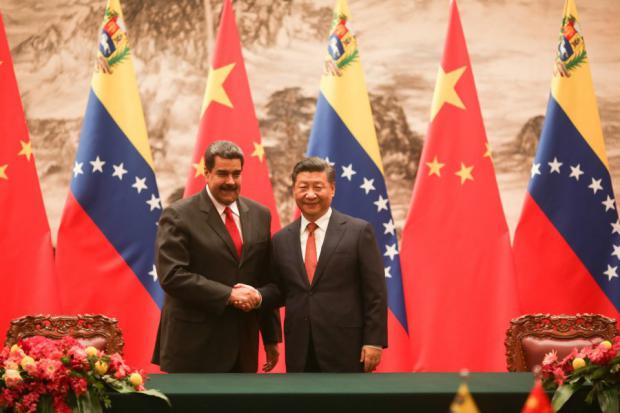 Along with Russia and other countries, China rejects unlawful US sanctions war on Venezuela — maintaining normal bilateral relations.

Thanking Beijing for cooperating with the Bolivarian Republic, countering the Trump regime's sanctions war, he tweeted:

"Extraordinary News! The first phase of the expansion of the 'Jose' Mixing Plant in the Anzoátegui state began, which will incorporate 165 thousand barrels of oil a day into national production. A mixed investment with our Chinese brothers that exceeds $ 1,860" billion.

On August 7, Bloomberg News reported that China's Wison Engineering Services Co. contracted to "repair Venezuela's main refineries in exchange for oil products including diesel, according to people with knowledge of the deal," adding:

The project is expected to last up to a year. Like other establishment media, Bloomberg supports illegal US sanctions on all its targeted countries.

It bemoaned the notion of Venezuela being able to restore the operational efficiency of its fuel production, saying it "would weaken the US economic blockade and put Maduro in a stronger negotiating position as talks with the opposition drag on without any visible progress."

Like other major media, Bloomberg ignored the illegality of Trump's sanctions war, saying nothing as well about Venezuela's preeminent social democracy — supporting Washington's illegal imperial agenda, instead of denouncing it.

The Trump regime "so far shied away from military intervention in Venezuela and has instead imposed economic sanctions that target the oil industry and key members of the government and the military," Bloomberg noted, adding:

"American officials continue to project confidence about replacing Maduro with a pro-business administration despite the lack of progress."

Venezuela is very "pro-business." Earlier during a period of economic strength, including higher oil prices, private banks in the country said they were having a "party" — meaning they were making lots of money.

The Bolivarian Republic earmarks most of its revenues to providing social services for all its people, including heavily subsidized food for needy families.

"(T)he new set of unilateral sanctions imposed by the US (on Venezuela) are extremely broad and fail to contain sufficient measures to mitigate their impact on the most vulnerable sectors of the population," adding:

"I fear that they will have far-reaching implications on the rights to health and to food in particular, in a country where there are already serious shortages of essential goods."

Since taking office in September 2018, she failed to denounce the Trump regime's illegal sanctions war on Venezuela's economy and population.

She said nothing about the US plot to topple its democratically elected and reelected government. Nor did she condemn the treasonous fascist opposition or the Trump regime's plot starve Venezuelans into submission.

Her days earlier concern rang hollow. Her mandate is supporting US-led Western viciousness, including its wars of aggression, not denouncing them.

Doing the right thing would get her replaced with a more convenient US stooge, doing its bidding.

Bachelet remains on the job for fulfilling the role of US-led Western puppet.

A "political solution" in Venezuela she called for starts with world community condemnation of the Trump regime's all-out war on the Bolivarian Republic and its people by other means.

Neither she or UN secretary general Guterres has the moral courage to do the right thing.

They and other top world body officials support US imperial rage over world peace, equity and justice — disgracing the positions they hold by being complicit with US, NATO, Israeli high crimes against peace.