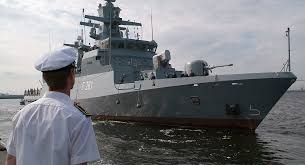 Britain's limited Persian Gulf naval presence so far is separate from the Trump regime's. The size of its fleet is a limiting factor. It's been declining for years.

According to Defense News.com, "(t)he US Navy has struggled to maintain its global commitments with a fleet of 290 ships, and it has seen a 52 percent decrease from its 1987 peak of 594 ships. The US Navy is today pursuing a goal of 355 ships," adding:

"(D)uring roughly the same time period, (Britain's) navy has lost more than 40 percent of its fleet, that stood at more than 130 ships. Today's Royal Navy numbers fewer than 80 ships."

Pentagon warships are deployed worldwide, limiting its capability to mobilize a large strike force in multiple global areas, along with maintaining its other global deployments.

"…(T)here is a military role in defending freedom of navigation" in the Hormuz Strait. "The question will be to what extent the international community is behind that effort," adding:

"If the Iranians come after US citizens, US assets or US military (sic), we reserve the right to respond with a military action. They need to know that. It needs to be very clear."

Selva, other Pentagon commanders, and senior US political officials know Iran is "com(ing) after" no one.

The US military presence in the Middle East and elsewhere worldwide poses a major threat to world peace, stability, and security.

Nonbelligerent Iran is threatened by the US military presence near its territorial waters, coastline, and mainland, not the other way around.

"Members of the German government have been clear that freedom of navigation should be protected...Our question is, protected by whom" against what threat?

Iran poses none. A German Foreign Ministry statement said Berlin "took note of the (US) proposal, but made no promises," adding:

"Foreign Minister Maas has repeatedly stressed that, in our opinion, priority must be given to reducing tensions, and to diplomatic efforts."

"We are in close consultation with France and the UK. Participation in the US strategy of 'maximum pressure' is ruled out for us."

"The goal of all responsible politicians must be to observe the situation very soberly and carefully, and not to sleepwalk into an even bigger crisis," he stressed, adding: "Deescalation is the order of the day."

In May during a visit to Iraq, nonbelligerent Iran signed a non-aggression pact with Persian Gulf littoral states.

It emphasizes mutual cooperation for regional peace in a part of the world boiling from US aggression. Reportedly Iraq, Qatar, Kuwait, and likely Oman welcome the agreement, Tehran still awaiting responses from other regional countries.

An unnamed Arab source said "(i)n response to Washington's request for joining an international coalition to protect commercial ships in the region, Kuwait stated that the situation in the region was not like Saddam Hussein's…"

"Kuwait had earlier rejected the US request for deployment of four B-52 bombers in Kuwait."

Russia prepared its own plan for Persian Gulf Security, its principles polar opposite US belligerent aims.

"Under the current circumstances, active and efficient steps at the international and regional levels are needed to normalize and further improve the situation in the Gulf area, overcome the protracted crisis phase, and turn this subregion towards peace, good-neighborliness, and sustainable development."

The initiative includes the following principles:

Mutual cooperation to eliminate regional extremism and terrorism in Syria, Yemen, and elsewhere in the region.

Mobilizing and influencing regional public opinion about the threat posed by terrorist groups and need to counter them by collective action.

All nations adhering "to international law, to the UN Charter, and UN Security Council resolutions in the first place. We all aim for a democratic and prosperous Middle East that would encourage inter-faith peace and coexistence."

Trump regime hardliners strongly oppose Moscow's initiative, along with any proposal for world peace and stability.

Achieving it undermines its imperial aims, why Russia's plan won't get out of the starting gate.

The Pentagon's Operation Sentinel has nothing to do with protecting commercial or other shipping from an Iranian threat that doesn't exist.

It may set the stage for a Gulf of Tonkin type false flag, wrongfully blamed on Iran, something more serious than others weeks earlier no evidence suggests Iran had anything to do with.

If US, UK, or other Western casualties occur, it could be a pretext for greater US toughness on Iran, including belligerence against its vessels, provoking the IRGC to respond, risking possible war.

What cool heads in the US, other Western states, and regional ones want avoided could be undermined a staged Trump regime incident, falsely blamed on Iran, setting off a chain reaction with unpredictable consequences.