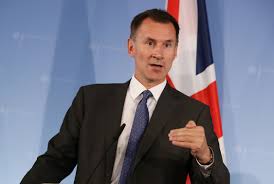 Post-WW II creation of the EU and NATO transformed its member states into virtual US colonies, subservient to its higher power.

On issues relating to nations the US considers adversaries, Europe's policy is joined at the hip with Washington, even when harming its interests.

The West has been hostile toward Iran since its 1979 revolution, ending a generation of US-installed fascist tyranny.

Washington wants it reinstituted to regain control over the country, its vast hydrocarbon and other resources, as well as eliminating Israel's main regional rival.

Will war be the Trump regime's strategy of choice to try ending 40 years of Iranian sovereign independence?

Will Europe go along, succumbing to US pressure and bullying — despite rhetorically expressing opposition to attacking Iran?

EU/NATO actions most often ally with US interests. On Sunday, for a UN Economic and Social Council ministerial meeting in New York, Iranian Foreign Minister Zarif slammed Europe for failing to honor its JCPOA obligations, saying:

"The Europeans claim they were willing to maintain the JCPOA, but we have not seen Europe yet to be ready for an investment," adding:

Vowing to honor it "is totally different from being ready to make the investments required to save that deal, and the Europeans have not done that yet."

Nor are they likely to change policy ahead. Allied with Washington's imperial agenda shows they can never be trusted.

Judge them by their actions alone. Britain, France, Germany, and the EU sided with the Trump regime after it unlawfully abandoned its JCPOA obligations in May 2018.

Their hypocrisy is glaring, demanding Iran fulfill its JCPOA commitments — despite failing to honor their own.

The agenda of these countries is do as we say, not as we do. They're hostile to preserving the JCPOA while pretending otherwise.

On Sunday, a joint French, German, UK statement turned truth on its head, falsely claiming their "commitment to the" JCPOA," adding:

Since the Trump regime abandoned the deal on May 8, 2018, "our three countries have made their best efforts to work with all the remaining parties to the deal to ensure that the Iranian people could continue to benefit from the legitimate economic advantages provided by the JCPoA (sic)."

Their hostile actions toward Tehran tell a different story. They lied saying "(o)ur countries have recently taken several diplomatic initiatives to contribute to de-escalation and dialogue, for which signs of goodwill are urgently needed, from all sides."

Fact: Europe remains in breach of its JCPOA obligations while demanding Iran fulfill its own.

The JCPOA is teetering toward collapse because of US-led Western hostility toward Iran, denying the country benefits mandated by the agreement.

Breaching it is proof positive of where these countries stand, compounded by Britain's illegal seizure of an Iranian supertanker and deployment of warships to the Persian Gulf.

They're part of a hostile/anti-Iran US-led naval coalition, on the phony pretext of "protect(ing) shipping" from a nation threatening no one.

Trump regime hardliners Pompeo and Bolton aim to enlist a coalition of the willing for war on Iran.

"(G)uarantee(ing) freedom of navigation" by the White House aims to militarize Persian Gulf waters and its strategic choke points more than already, risking confrontation with Iran by manufacturing a pretext to attack the country.

As long as Trump is manipulated by Pompeo, Bolton, and other regime hardliners hostile toward Iran, the risk of military confrontation remains high — by accident or design.

If occurs, it'll be made in the USA, preemptive wars its specialty.

Refusal of US allies to join a coalition of the willing against the Islamic Republic is the best chance to avoid potentially catastrophic conflict if launched.

The jury is very much out on how events will unfold ahead.

Zeinab Soleimani on Her Father's Assassination