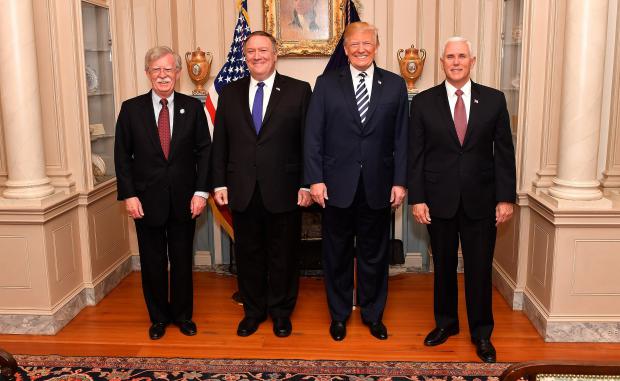 The John Hagee-led Christians United for Israel (CUFI) is a lunatic-fringe, hard-right Christian fascist religious fundamentalist group — seeking theocratic dominion in the US, allying with neocons in Washington in pursuit of its objectives.

Its messianic mission cloaks itself deceptively in Christian values and patriotism. Some critics call its leadership the Christian mafia. The group is well-funded by wealthy and powerful US right-wing elements.

The power of their message manipulates gullible, narrow-minded adherents to submissiveness.

With its millions of mind-manipulated members, John Hagee's CUFI is the most over-the-top, hate-mongering, anti-democratic, bellicose Christian fascist group in the US. His solution for saving Western civilization is preemptive war on Islam, Iran his prime target.

Along with Pence and Netanyahu, Pompeo and Bolton addressed CUFI at its annual July 8 and 9 annual event, rallying its faithful for anti-Iran hate-mongering.

Addressing thousands of faithful in attendance, Hagee said "14 years ago, I invited 400 of America's leading evangelicals to come to Cornerstone Church in San Antonio to give birth to CUFI."

Activists for peace, equity, and justice were at the gathering, interrupting addresses, chanting

Ahead of Tuesday's event, attended by CodePink activists to voice views opposite to what CUFI supports, the group denounced its extremism, saying the following:

Its leadership "promotes continuing Israeli colonization of Palestinian land and legislation repressing our right to boycott for justice for the Palestinian people."

"CUFI actively works to undermine the Palestinian freedom struggle and our solidarity movement. That's why CODEPINK is joining our partners Rise Against Racism and Counter CUFI."

"We must reject CUFI's right-wing agenda that advances Zionism, racism, and antisemitism. CUFI cynically supports Zionism out of a hatred and exploitation of Jews because they believe the state of Israel will hasten a prophecy of the return of Christ, and denies Palestinians their humanity."

He lied accusing Iran of lacking religious freedom. Jews and Christians in the majority Muslim country are free to practice their faith unobstructed — polar opposite how Israel persecutes Palestinians for praying to the wrong God.

Pompeo lied accusing Iran of "efforts to destroy the state of Israel." No such efforts exist from a republic that never attacked another nation — what the US, NATO and Israel do repeatedly, what naked aggression is all about.

Bolton turned truth on its head, calling the JCPOA "the worst diplomatic debacle in American history." Ignoring US aggression in multiple theaters, he ludicrously claimed "the world is changing for the better and the American people are safer" because of the Trump regime's (extremist) geopolitical agenda.