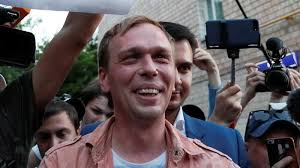 On June 6, investigative journalist Golunov was detained on spurious illicit drug charges, Moscow police saying a criminal case was launched against him for "illegal production, sale, and delivery of narcotic substances."

Placed under house arrest pending trial, he denied charges against him, saying "I'm ready to prove my innocence. I am ready to cooperate with the investigation if it plays by fair rules."

Golunov's lawyer called charges against him "a provocation (for) his professional journalistic occupation."

Russian media, celebrities, and the public rallied in solidarity with him, condemning his arrest and detention, demanding his release.

Kommersant's political staff resigned over his arrest. Putin spokesman Dmitry Peskov said "(m)istakes can never be ruled out," adding: "The important thing is to recognize mistakes so that they aren't repeated. Some issues need clarification."

Agora lawyers' association head Pavel Chikov representing him said results of tests given him showed no evidence that he handled illicit drugs as police claimed.

Russia's NTV public television anchor Irada Zeynalova called Golunov's case "a test for all of us," supporting him against dubious charges.

TV host Vladimir Pozner called his arrest "a spit in the face of all Russian journalists." RT's editor-in-chief Margarita Simonyan said "(t)he government must answer all the public's questions about this arrest," calling for Golunov's release.

Public protests were held in his behalf, noted figures participating. Dozens of Russian journalists wrote a supportive open letter calling for his release.

US and other Western media accused the Kremlin of cracking down on press freedom. Public outrage over Golunov's mistreatment, including by Russian media, worked.

On Tuesday, he was released from house arrest, charges against him dropped for lack of credible evidence.

"I'll continue to pursue the work I've been doing," he said following release, adding: "I'll make investigations since I have to justify the trust of those who supported me. (It's) been, indeed, fantastic."

According to Russia's Interior Minister Vladimir Kolokoltsev, police officials involved in framing Golunov were suspended, pending an investigation into their actions.

Compare his case to how US-led Western media and officials treated Julian Assange.

The NYT, neocon/CIA-connected Washington Post, Wall Street Journal, and other US major media called him no free-press hero, slamming him with a broadside of pejoratives, denigrating him like Edward Snowden and Chelsea Manning are vilified.

The NYT said "(h)e deserves his fate," calling him "an odious person," falsely accusing him of "act(ing) as a conduit for Russian intelligence services…and help(ing) (to) spread the conspiracy theory (sic) that the leaked (Dem) email's" weren't hacked.

John Bolton earlier said Edward "Snowden should swing from a tall oak tree." He called for "a cyberwar attack on WikiLeaks."

In days, unjust actions against Golunov were dropped by Russian authorities, his release and exoneration greatly aided by Russian media and public support.

Treatment of Assange is polar opposite, framed and wrongfully vilified by US officials and media, arrested and imprisoned in Britain to facilitate his handover to Trump regime authorities for crucifixion.

Justice prevailed in Russia for Golunov, his treatment polar opposite how the US and UK operate — fascist police states masquerading as democracies, a notion their ruling authorities abhor and tolerate nowhere.