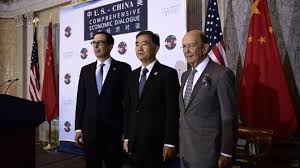 Hardline US demands got Beijing to believe "no deal is better than a bad deal," the Trump regime demanding "enormous, even hundreds" of changes to Chinese law to protect intellectual property.

Beijing rejects US heavy-handed scrutiny and other unacceptable actions violating its sovereign rights, along with stiff penalties for violating what the Trump regime demands, no penalties for US breaches suggested.

As things now stand following the breakdown in talks weeks earlier, "China and the US have fundamentally contradictory attitudes as to what would be a good deal," Shi explained.

Things have "become a zero-sum game where neither party can accept something the other side would deem a good deal."

China was willing to come to an agreement with the US months earlier. When Trump regime negotiators kept kept raising the bar with unacceptable demands, things broke down, remaining at impasse.

At the same time, the US side refused to lift tariffs until its demands are met, threatening up to 25% tariffs on all Chinese imports.

Trump said if President Xi Jinping doesn't meet with him at the June 28-29 G20 summit in Osaka, Japan, further US duties on another $300 billion worth of Chinese goods will be imposed straightaway.

He earlier threatened this move if bilateral differences aren't resolved soon. Beijing hasn't indicated whether Xi will attend the summit.

Both leaders last met at the November 20-December 1, 2018 G20 summit in Buenos Aires, Argentina. According to China's Foreign Ministry spokesman Geng Shuang, "(i)f there is concrete news on" a Xi/Trump meeting this month, "China will release it in a timely manner," adding:

"China does not want to fight a trade war, but is not afraid of one. If the US side is willing to have equal consultations, then our door is open. If the US side insists on escalating the trade friction, we will firmly respond and fight to the end."

Beijing has plenty of ammunition to retaliate against hostile US actions. Clearly, its ruling authorities won't roll over to unacceptable US demands.

Trump's claim that China will make a deal with the US "because they're going to have to" shows ignorance and arrogance about the nation, its leadership and principles.

They're all about wanting China contained, weakened and isolated politically, economically, financially, and militarily, the trade deficit a minor issue in comparison.

Perhaps the best to hope for from a Xi/Trump meeting would be a softening of rhetoric threats by the US side.

According to the Federal Reserve Bank of New York, "higher tariffs are likely to create large economic distortions and reduce US tariff revenues," adding:

"Very high tariff rates can…cause tariff revenue to fall as buyers of imports stop purchasing imports from a targeted country and seek out imports from (less efficient) producers in other countries."

A Tariffs Hurt the Heartland study estimated that imposing 25% duties on all Chinese imports would jeopardize nearly a million US Jobs, along with causing economic harm and roiling financial markets.

Tariff wars assure losers, not winners, a reality Trump will discover if he sticks to his unacceptable policy and escalates it.