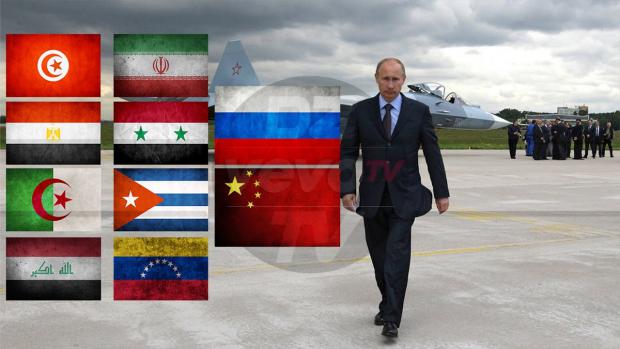 Russian and Syrian forces are falsely blamed for continued shelling of "civilian infrastructure, medical and education facilities" — supported and encouraged by the US and its imperial partners, rejecting Kremlin efforts for diplomatic conflict resolution.

MZ: "We are particularly concerned over the fact that the terrorists do not abandon their attempts to aggravate the situation in Idlib by preparing provocative chemical attacks" — falsely blamed on government forces.

"According to our sources, (US supported al-Nusra) terrorist(s) established a separate unit" to carry out CW attacks on Syrian civilians.

Conditions in the al-Hawl refugee camp controlled by the US are dire, "overflowing (with) over 74,000 residents, including over 47,000 minors."

"They are hard pressed for water and food, and there is a dire shortage of medical personnel, medication and medical equipment."

"Infectious diseases are spreading in the camp whose whose residents lack elementary hygiene facilities."

The threat of direct US military intervention or proxy war continues. The Trump regime's "war on 'tyranny in the Western hemisphere' (against) Venezuela, Cuba and Nicaragua" threatens the sovereign rights of these nations and their people.

"(W)e welcome (dialogue between) the government and the opposition" — even though talks ended with no agreement because Trump regime hardliners are uncompromising on their unacceptable demands.

MZ commented on their deplorable anti-Cuba sanctions, an attempt to eliminate tourism and educational trips to the country, unjustifiably justified by bald-facef Big Lies, similar to phony claims about all nations on Washington's target list for regime change.

MZ: "We strongly condemn the tightening of the US embargo on Cuba. We are confident that stronger sanction strangling of Havana, above all, hits ordinary citizens, depriving them of their fundamental rights and freedoms…"

Tough talk by Russia isn't good enough in dealing with Washington's hostile agenda when tough actions are needed, notably treating the US as an adversary, not a "partner."

When it comes to Kiev's hostility toward the people of Donbass, Ukraine's president Zelensky is no different than his fascist predecessor Poroshenko so far, MZ saying:

He "failed to ensure a ceasefire (that was promised during the election marathon) in southeastern Ukraine. According to experts, the intensity of fire attacks has increased in the past seven days, with almost double the number."

According to a Donetsk People's Republic representative, Ukrainian forces launched "a total of 63 projectiles against the south of the republic and the outskirts of Donetsk," adding:

They fired mortars at residential areas. During a meeting Zelensky had with neocon US Senator Robert Portman, he said he's waging two wars — against Russia and corruption.

His hostility toward Moscow is no different from the Poroshenko regime, falsely blaming the Kremlin for Donbass' split from Kiev, refusing to accept Nazi-infested fascist rule connected to the US.

Separately, MZ slammed unacceptable "US demands to the entire world," delivering ultimatums to one country after another, what no responsible governments should accept.

She mocked the US, listing outrageous demands, typical of how it operates on the world stage, saying the following:

"Europe must pay for NATO membership and buy US-made weaponry, and it must not cooperate with Russia."

"Europe must annul Nord Stream agreements and buy US gas at higher prices."

"European telecommunications companies must not buy cheap and high-quality equipment from Asian countries" — mainly not from China.

"Europe must store US nuclear weapons on its territory forever."

"India must curtail its military-technical cooperation with Russia."

"China must charge low duties on US goods, but it must not object to high tariffs being imposed on its goods exported to the United States."

"China (must not) compete with the United States in the telecommunications (or any other) sector(s)."

"Beijing must give the United States full access to China's high-tech industry" for exploitation.

"The Philippines must not purchase Russian weaponry nor fight the drug mafia" the CIA relies on for revenue along with Western banks, laundering dirty money.

"Mexico must pay the United States for building a wall along the border" — to keep out unwanted aliens of the wrong color and ethnicity.

"South Korea must deploy US missile-defense systems on its territory and join sanctions imposed on…high-tech Chinese company" Huawei and any other enterprises in the country the US targets.

"Japan must forget about Hiroshima and Nagasaki, and the entire world must recognize that it was the United States that won World War II — even though Soviet Russia defeated Nazi Germany, US and other Western forces operating as junior partners.

"Iran must not develop its peaceful civilian nuclear power industry."

Washington's "demands with regard to the Democratic People's Republic of Korea (North Korea), Syria, Venezuela and Iran (and other sovereign independent nations) are so excessive that these states would be unable to fulfill them even if they wanted to."

"Judging by Washington's current logic, it would be better for them to disappear altogether. This would resolve all matters."

"Speaking of Russia, I am afraid to even start listing what it must do."

How the Prague Spring Led to the Fall of Communism

Battle of the Ages to stop Eurasian Integration