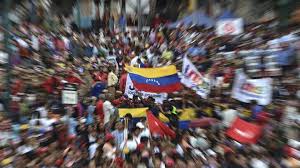 Americans relying on what passes for establishment print, cable, broadcast, and radio "news" are mind-manipulated know-nothings, their heads filled with mush.

The Trump regime's coup attempt against Venezuela, the hemisphere's preeminent democracy, is the most brazen in modern times.

The neocon/CIA-connected Washington Post published a propaganda piece on Venezuela by a Bloomberg News writer (WP-B below). Reinventing what's going on, it said:

Venezuela's "economy has collapsed (sic), plagued with shortages of everything from toilet paper to antibiotics and food (sic). And it's not entirely clear who's in charge any more (sic)."

"(O)pponents of President Nicolas Maduro have declared his government invalid (sic) and one of their own his replacement" illegally, WP-B failed to explain.

"Power outages and water shortages that spread throughout the country for most of March sparked protests (sic) against Maduro. But the two sides remain locked in a standoff over who is the legitimate authority in Venezuela (sic)."

Fact: Ignored was the Trump regime's coup plot against sovereign Venezuela and its legitimate government, its war on the country by other means, its illegal sanctions, threats of military intervention, and daily propaganda war.

Fact: Establishment media are the main disseminators, serving as the coup plot's press agents - willfully and maliciously deceiving followers of their rubbish.

WP-B: "…Maduro and opposition leader Juan Guaido both claim to be president…"

Fact: Maduro is legitimate, political nobody Guaido an imposter, a traitor to his country and people - belonging in prison where he'll likely end up unless given asylum abroad.

WP-B: "Guaido…announced Jan. 23 that he had assumed Maduro's powers atop a caretaker government (sic) until new elections can be held (sic)."

Fact: Widely reviled, he has no power in Venezuela. Maduro was democratically reelected for another six-year term. Presidential elections will next be held in 2025.

WP-B: "The US has issued sanctions on (state oil company) PDVSA (in an attempt to try) block(ing) Venezuela from exporting" Venezuela's main source of revenue."

WP-B: "With the backing of the US and other countries, Guaido has argued that Maduro's May 2018 reelection was illegitimate (sic)."

He "cites Article 233 of Venezuela's constitution, which invests temporary presidential power in the head of the National Assembly when the presidency is otherwise vacant (sic)."

He "also cited Article 350, which says Venezuelans "shall disown any regime, legislation or authority that violates democratic values, principles and guarantees or encroaches upon human rights."

"The President of the Republic shall become permanently unavailable to serve by reason of any of the following events: death; resignation; removal from office by decision of the Supreme Tribunal of Justice; permanent physical or mental disability certified by a medical board designated by the Supreme Tribunal of Justice with the approval of the National Assembly; abandonment of his position, duly declared by the National Assembly; and recall by popular vote."

"When an elected President becomes permanently unavailable to serve prior to his inauguration, a new election by universal suffrage and direct ballot shall be held within 30 consecutive days. Pending election and inauguration of the new President, the President of the National Assembly shall take charge of the Presidency of the Republic."

Nothing stated above applies to Maduro – democratically elected and reelected by a process independent monitors called open, free, and fair – his legitimacy affirmed judicially, an attempt by a foreign power to replace him a flagrant breach of international law.

Nothing in Article 350 applies to Maduro or his government.

WP-B: "Maduro's election to a second six-year term was marred by the jailing and disqualification of opposition politicians (sic) — most of whom ultimately joined a boycott of the vote — along with the coercing of government workers to vote (sic) and reports of fraud (sic)."

Fact: All of the above are bald-faced Big Lies. Independent election monitors called Maduro's reelection open, free, and fair, no one coerced to vote, no law-abiding candidates disqualified and jailed.

WP-B: "Russia and Bolivia continue to recognize Maduro as Venezuela's rightful leader, as does China, (and) Erdogan of Turkey.

Fact: Around 25 nations publicly recognize Maduro as Venezuela's legitimate president. Three-fourths of the world community and the UN refused to recognize imposter Guaido.

The WP-B report is full of disinformation and fake news. What's omitted is most important - the truth about Venezuela, Maduro, his government, and popular rejection of Guaido.