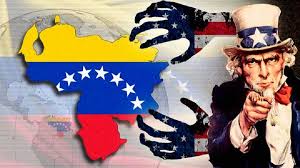 Sovereign independent democracies stand in the way of US aims for unchallenged global dominance. Bipartisan hardliners in Washington want them eliminated everywhere.

Venezuela is in the eye of the storm, the Trump regime hellbent for toppling democratically elected and reelected Nicolas Maduro, wanting the Bolivarian Republic transformed into a US vassal state.

His trip was all about seeking greater regional commitment to toppling Maduro and replacing Venezuelan social democracy with US-controlled fascist tyranny - what the nation's military and its ordinary people strongly oppose.

In Chile, Pompeo turned truth on its head, saying both countries have "shared values, principles like democracy (sic), rule of law (sic), respect for human rights (sic), and the value of freedom (sic)."

Fact: The US and its imperial partners are hellbent on eliminating all of the above everywhere.

"Chile actively seeks…the return to democracy in Venezuela (sic) through free, transparent elections (sic), and according to international standards (sic)."

It's polar oppose the money-controlled US system, its fantasy democracy. The same goes for other Western countries, along with most Latin and Central American states - run by fascist regimes, notably ones Pompeo visited on his tour.

The so-called Lima Group of regional nations, an artificial, likely CIA created, construct with no international legitimacy, comprised of right-wing Latin and Central Americans countries plus Canada is all about conspiring with US aims to topple Maduro and eliminate Bolivarian social democracy.

Ampuero: "We are working together with (its) member countries (to) return…democracy in Venezuela (sic) through a peaceful outlet by Venezuelans themselves (sic), and the attention to this humanitarian crisis suffered by that country (sic)."

Fact: Aims of the Trump regime and its regional imperial partners are polar opposite the above claims.

Pompeo: "The United States and its allies will not quit this fight" to gain a US imperial trophy in Venezuela.

The same goes for Cuba and Nicaragua, what John Bolton earlier referred to as a "troika of tyranny" along with Venezuela.

A "troika" of fundamental freedoms and social justice best describes them, why Trump hardliners target them for regime change.

In his remarks, Pompeo slammed China, reciting a litany of bald-faced Big Lies he and other Trump regime officials repeat time and again because of Beijing's growing influence where the US seeks unchallenged dominance.

The same dog and pony theatrics repeated in Paraguay, Peru and Colombia. Pompeo raged about the nonexistent humanitarian crisis in Venezuela, ignoring US sanctions war and other lawless actions.

He lied about US concern for its people, wanting "a better future for (them) (sic)…a restoration of normal life and economic opportunity and prosperity (sic)," promising fake humanitarian aid, adding:

"(B)efore these things happen, Maduro's usurpation (sic) must end. All Venezuelans and the world should reject the illegitimate authoritarian rule imposed on the Venezuelan people (sic), including the Venezuelan military leadership."

"The United States will continue to utilize every economic and political means at our disposal to help the Venezuelan people (sic)."

Fact: US sanctions war and other harsh tactics are all about inflicting pain and suffering on ordinary Venezuelans, along with making the Bolivarian economy scream.

Separately, Pompeo slammed Russia for its involvement in Venezuela, both countries working cooperatively, polar opposite US exploitive tactics.

Bilateral relations between them are vital to defeat US imperial aims, a scourge harming ordinary people everywhere.