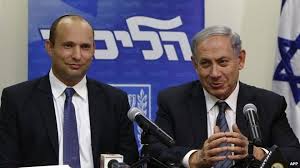 With over 97% of votes counted, Netanyahu and leading challenger Benny Gantz each won 35 of the Knesset's 120 seats, according to the unofficial tally.

Israelis have themselves to blame, keeping Netanyahu in power as prime minister for the past decade, another four-year term likely as analysts believe a majority of Knesset members support him.

Likud under him represents extremist fascist rule - neoliberal harshness for most Jews, apartheid viciousness for Israeli Arabs and Occupied Palestinians.

Institutionalized racism is official Israeli policy under all its ruling coalitions. So is state terrorism, as well as undeclared war on Palestinians and Syria, slow-motion genocide against two million Gazans, suffocating under politicized blockade, attacked repeated by the IDF, the world community doing nothing to stop their suffering.

Israel is a fantasy democracy, not the real thing. Millions of Palestinians are disenfranchised. Their entire population in Israel and the Territories has no say over how they're governed.

Nearly five million Palestinians in the Territories and Israel are victimized by occupation, colonization, and apartheid state terror, high crimes under international law by any standard.

No matter how Israeli elections turn out, their persecution continues, self-determination denied them by all Israeli regimes.

No-peace/peace talks when held represent the greatest hoax in modern times - along with the US war OF terror, not on it.

Unofficial results have Netanyahu's Likud and Gantz's Blue and White party tied with 35 seats (each with 26% of the vote), around 14,000 votes separating them with about 100,000 remaining to be counted as of 9AM local time.

Naftali Bennett, Ayelet ("little snakes") Shaked, along with other hard-right figures failed to gain enough votes for Knesset seats. Turnout was 68%, down from 72% in 2015, largely because most Israeli Arabs opted out of the process, knowing no matter who wins, they lose.

The above results may change slightly once final results are official. Exit polls varied, at least one showing Gantz's Blue and White part ahead of Netanyahu's Likud by four seats, another showing the prime minister slightly ahead.

According to the left of center Meretz party, ballots were missing at one or more polling stations, adding their voters complained of "vandali(zed) Meretz ballots."

Ones damaged or written on may be invalidated - reminiscent of "hanging chads" in the US 2000 presidential election - won by Al Gore, handed to Bush/Cheney by majority Supreme Court justices.

Benefitting from low Arab turnout, Netanyahu and coalition partners appear to have won 65 - 67 seats for majority control, the prime minister to retain power if official final results turn out this way.

Left-of-center Israelis, Palestinians, the Arab street, and supporters of peace, equity and justice everywhere are losers with the Netanyahu regime retaining power - even though his looming indictment for fraud, bribery and breach of trust may undo him.

For the moment, he appears triumphant, winning another four years in office. Indicting, prosecuting, convicting, sentencing, and imprisoning him will rain on his parade if things go this way.