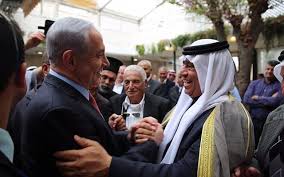 Israeli Arab citizens comprise 20% of the population. By turning out in force, they can defeat Netanyahu's reelection aim - eliminating the scourge he represents, short of improving conditions for persecuted Palestinians in Israel and the Territories.

Last month, he publicly demeaned them, saying they're not real Israelis, adding "Israel is not a state of all its citizens. Israel is the nation-state of the Jewish people — and it alone."

According to Adalah Legal Center for Arab Minority Rights in Israel's executive director Hassan Jabareen, "(w)hat's taken for granted in democratic countries around the world, a state based on the principle of equality for all citizens, is considered anathema in Israel under Netanyahu's racist regime."

The same is true for all its regimes throughout the country's history, Netanyahu most of all, a hardline Islamophobic fascist extremist exceeding Sharonian evil.

Like elections in the US and other Western countries, Israel's process is rife with dirty tricks.

A CEC statement said the following:

"A notice to the Secretaries of the Legal Counsel to the Central Elections Committee Members of the Ballot Committee and/or other officials, including the Secretary:"

"It is forbidden to photograph voters or the voting process. It is permitted to take photographs only in cases of exceptional events in order to report an incident, and in the event of a forbidden photograph, the police or the committee's representatives must be updated and reported to the committee's event management room."

Israeli police said that "following a number of suspected irregularities in polling stations in the northern region, (they're) working in these focal points, in coordination with the Elections Committee, in order to maintain public order and prevent harm to the integrity of the elections and the secrecy of the vote."

Hadash-Ta'al party leadership explained that right-wing Israeli hardliners understand the power of Arab voters. If mobilized to turn out in force, they can be a deciding factor in Tuesday's election.

The party denounced the Netanyahu regime for "cross(ing) every border using illegal means in an attempt to intervene and prevent Arab citizens from voting, but we too understand our strength."

Balad party leadership explained that it "received a message that right-wing activists are disrupting the electoral process in Arab towns by means of wiretapping and hidden cameras whose purpose is to deter the Arab public from voting," adding: "We do not give in to the attempts to delegitimize us."

Low Arab voter turnout benefits Netanyahu, why hidden cameras and likely other dirty tricks aim to discourage their participation in the electoral process.

Israeli Arab voters should prioritize turning out in force to defeat Netanyahu.