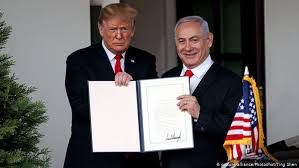 On March 25, Trump defiantly breached international and US constitutional law, under the Supremacy Clause, by signing a proclamation, illegally and brazenly recognizing Golan as Israeli territory.

His action was automatically null and void, changing nothing but further US isolation over this and other issues.

"Russia…takes a principled position on the issue of the Syrian Arab Republic's ownership of the Golan Heights. This is confirmed by UN Security Council Resolution 497 of 1981. Our assessment of the unlawful nature of Israel's decision to extend its sovereignty to the Golan Heights remains unchanged."

"The statements did not change the reality that the Golan was and will remain Syrian, Arab."

"The Syrian nation is more determined to liberate this precious piece of Syrian national land through all available means."

Calling it a "slap in the face to the entire world, he declared it illegitimate "unilateral behavior (with) no legal (validity) or political value."

Saying it's a threat to international peace and stability and an attempt to reinvent history, Jaafari added:

"The Syrian people consider the US as an enemy, outlaw state which occupies part of their land after it had caused the killing of thousands of Syrians and destroyed infrastructure and economy."

"Syria reaffirms that the occupied Golan will return…The US and Israel shouldn't think that a Syrian land could be part of a malicious bargain."

"Don't be misguided by thinking that one day this land will be yours due to hypocrisy or due to being a pawn in the electoral game where you bring each other support, so the Israelis can succeed in their elections and the Americans can also get support from Israeli lobbying groups in the US."

"Why not give Israel North and South Carolina? Give them some land from your states if you really want to support Israel."

Germany's UN envoy Christoph Heusgen called Trump's move "deeply cynical." The US is isolated over this issue with no support from other SC members or the world community.

EU foreign policy chief Federica Mogherini issued a statement for the bloc, saying its 28 member states do "not recognize Israeli sovereignty over the occupied Golan Heights."

Golan is sovereign Syrian territory. Israel illegally occupies it. The same goes for the West Bank, East Jerusalem and Gaza.