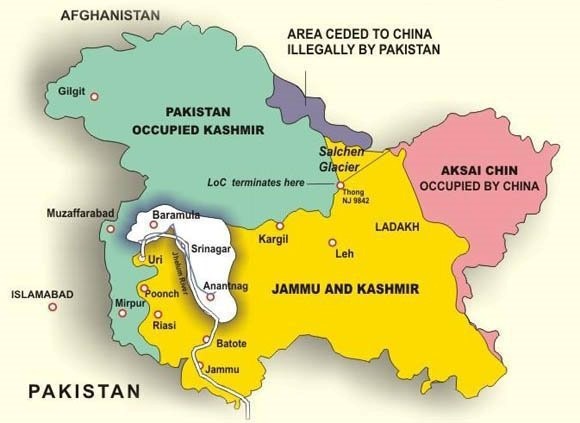 Flashpoint Along the Indo/Pakistani Line of Control in Kashmir

Both countries clashed for two weeks on their eastern and western fronts, ending when Pakistan's military agreed to halt hostilities, preventing a more protracted conflict at a time before they became nuclearized.

In 1971, then-Pakistani President Zulfiqar Ali Bhutto vowed to develop and produce nuclear weapons if India chose this course, at the time saying:

"We will develop nuclear stockpiles, even if we have to eat grass." Both countries today are nuclear armed and dangerous if they choose to use these weapons against each other or another nation.

Never before in world history have two nuclear powers gone to war with each other - what's threatened now, things flaring up intermittently after Indo/Pakistani skirmishes since September 2016.

Their Line of Control in Kashmir remains a longstanding dangerous flashpoint, dozens of military and civilian casualties occurring on both sides since 2016 alone.

In May 2018, both nations agreed to fully implement a 2003-agreed on cross-border ceasefire. Intermittent clashes continued.

They occurred for days last November across the Indo/Pakistani Line of Control, causing at least 25 deaths, mostly civilians.

Sporadic clashes threaten possible war between both countries, military commanders on both sides vowing to intensify fighting to protect their national interests.

In mid-February, a suicide bomber rammed an SUV laden with explosives into a  bus in Indian-controlled Kashmir, killing over 40 security personnel, injuring others in a 78-vehicle convoy, transporting around 2,500 Indian soldiers.

Responding to the incident, Indian Prime Minister Narenda Modi vowed to make what he called Pakistan's "terror outfits and those aiding and abetting them…pay a heavy price," adding:

"Let me assure the nation. Those behind this attack, the perpetrators of this attack will be punished," authorizing "complete freedom of action" for India's military in response to the incident.

"The blood of the people is boiling...Our neighboring country, which has been isolated internationally, is in a state of illusion, think(ing) such terror attacks can destabilize us, but their plans will not materialize."

On Tuesday, Indian warplanes struck what New Dehli called a Jaish-e-Mohammad Kashmir-based training base, saying its Mirage 2000 warplanes used laser-guided bombs on the facility, claiming up to 300 jihadist deaths, saying the group was planning another terrorist attack against India.

Since inception in 2000, the group carried out terrorist attacks in Jammu and Kashmir, wanting the territory separated from India to become part of Pakistan exclusively.

Kashmiri terrorists have ties to US-created and support al-Qaeda, these elements used as imperial proxies in the Middle East, Central Asia, North Africa and elsewhere.

"In response to PAF (Pakistan Air Force) strikes this morning as released by the MoFA (Ministry of Foreign Affairs), the IAF (Indian Air Force) crossed the LOC (Line of Control)."

"PAF shot down two Indian aircraft inside Pakistan airspace. One of the aircraft fell inside AJ&K (Azad Jammu and Kashmir), while the other fell inside the IOK (Indian-Occupied Kashmir). One Indian pilot was arrested by troops on the ground."

"This was not a retaliation to continued Indian belligerence. Pakistan has therefore taken strikes at non-military target, avoiding human loss and collateral damage."

"Sole purpose being to demonstrate our right, will and capability for self-defense. We have no intention of escalation, but are fully prepared to do so if forced into that paradigm. That is why we undertook the action with clear warning and in broad daylight."

"Prime Minister Imran Khan told the army and people (to) get ready for any eventuality. Now it is time for India to wait for our response. We have decided. Wait for it."

The incident occurred after India's attack on a JeM terrorist camp the Pakistani town of Balakot. On Tuesday, New Dehli and Islamabad made conflicting claims.

China's Foreign Ministry spokesman Lu Kang urged both countries to "maintain dialogue and take actions to achieve peace and stability in the region."