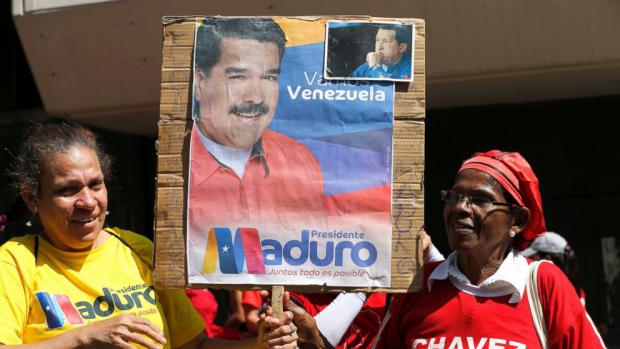 Venezuela's Legitimate Government: What the US Says It Is

The US asserts the unilateral right to decide the legitimacy of governments worldwide.

Ruling authorities not approved by Washington are considered illegitimate, operating by its own rules alone, international and its own constitutional laws ignored.

Elections when held are only deemed valid if winners are endorsed by the US. Sovereign independent governments unwilling to subordinate the rights and well-being of their people to US interests are considered illegitimate.

Democracy means rule by Washington, ordinary people to have no say anywhere, especially at home.

Democracy building is code language for smashing nations into submission, forcefully transforming them into vassal states, puppet rule subservient to the US installed to run things, its monied interests able to plunder colonized states freely.

A so-called Trump "fact sheet" turned truth on its head, claiming he "supports the Venezuelan people's efforts to 'restore democracy' in their country…and the rule of law" - notions Republicans and undemocratic Dems consider abhorrent everywhere.

According to Bloomberg News, the Trump regime is "seeking support for a United Nations Security Council resolution condemning Venezuela's government for blocking humanitarian aid from entering the country and calling on President Nicolas Maduro to hold new elections."

The US resolution laughably expresses "deep concern about the human rights and humanitarian situation in the Republic of Venezuela, including recent attempts to block the delivery of humanitarian aid."

US humanitarian intervention in all forms are pretexts for regime change. Washington and its imperial partners are starving millions of Yemenis by endless war and blockade – while pretending to care about Venezuelans suffering from its economic, financial, and sanctions war, people they don't give a damn about.

So-called US humanitarian aid is a cynical political stunt wherever offered. Maduro called it a pretext for invasion.

It ignores what's clear to everyone paying attention, aware of what's going on in Venezuela and Washington, knowing crisis conditions were made in the USA, exacerbated by low oil prices.

Since Hugo Chavez's December 1998 election and establishment of Bolivarian social democracy, the US, under four right-wing extremist Republican and undemocratic regimes, sought to eliminate it, wanting Venezuela colonized, control gained over its oil and other valued resources.

That's what imperialism is all about, masquerading as democracy building, the most deadly US export, responsible for the highest of high crimes of war and against humanity globally.

In response to the Trump regime's power play, Russia drafted its own Security Council resolution, supporting Venezuelan sovereignty and Maduro's legitimacy as president.

Neither resolution will be adopted, the US one to be vetoed by Russia and likely China, Moscow's to be defeated by the Trump regime, clearly supported by Britain and France.

According to Tass, Russia's Security Council draft resolution "calls for settling the situation in Venezuela by peaceful means," adding:

The UNSC "supports all initiatives aimed at achieving political settlement, including the mechanism developed in Montevideo" - where an international conference was held on Venezuela last week, jointly organized by Uruguay and Mexico, Western and regional nations participating, not the US.

According to an unnamed diplomatic source, both resolutions haven't yet been submitted to the Security Council, adding:

"Expert consultations on this will be held at the start of next week…The US has not yet recalled their chairperson's draft statement after the last UN Security Council session on Venezuela."

"The Russian delegation then suggested several amendments that the US did not agree with, but they also did not withdraw the draft."

Separately, Reuters reported that Venezuela's state-owned PDVSA oil giant intends depositing revenues from oil sales "in an account recently opened at Russia's Gazprombank AO, according to sources and an internal document seen by Reuters on Saturday."

It's an attempt to circumvent illegally imposed US sanctions on Venezuelan oil sales, wanting revenues diverted to usurper in waiting Guaido.

PDVSA customers were reportedly instructed to deposit payments into accounts of the Russian bank. They were urged to decide whether to continue legitimate business with Venezuela or bow to the Trump regime's illegal power grab attempt.

PDVSA vowed to shift sales away from countries supporting the coup attempt to customers in others backing Maduro's legitimacy.

Russia vowed to defend its joint-project interests in Venezuela, "using all mechanisms available to us," according to Putin spokesman Dmitry Peskov - with no further elaboration.

With around $20 billion in outstanding loans to Venezuela, China has the most to lose from Trump's power grab if successful.

The fate of the nation hangs in the balance, the jury very much out on what'll play out ahead. All bets are off if Trump authorizes military intervention.

Whatever happens, key is what China and Russia intend doing beyond rhetorical support for Maduro, falling on deaf ears in Washington.